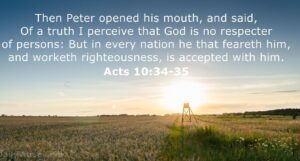 GNT … Peter began to speak: “I now realise that it is true that God treats everyone on the same basis … no matter what race they belong to’

Be you Black, White, Yellow or Brown, God sees you as one color; The color of Forgiven! Blood Red.