Paul’s Radical Conversion To Christianity (Listen to or Read) 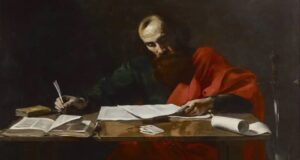 There are several persuasive reasons as to why Paul’s radical conversion is significant for defending the historicity of Jesus’ resurrection.

Our best historical evidence sees Paul, who formerly persecuted and killed early Christians, converted as a direct result of an experience with the risen Jesus. He tells us of his persecution of the early Christians, and goes as far as to say that, “I am the least of the apostles, unworthy to be called an apostle because I persecuted the church of God” (1 Cor. 15:9). Yet, in our early creed he affirms that Jesus had appeared to him (1 Cor. 15:8), James, Peter and many others.

Prior to his conversion Paul was a persecutor of the early church and consented to murdering early Christians. Our first question should be in answer to “Why Paul, as a Pharisee, was so hostile to the early Christian proclamation of the risen Jesus?”

In fact, Paul answers this for us. As a Pharisee, Paul had a high view of the Old Testament (OT), yet in the OT we find that if anyone is crucified he has been cursed by God: “for the one who is left exposed on a tree is cursed by God. You must not defile your land which the Lord your God is giving you as an inheritance” (Deuteronomy. 21:22-23). Paul, like other Jews were waiting and anticipating the coming of the Messiah who would overthrow Roman rule and the oppressors.

So, when the early Christians were telling fellow Jews & gentiles that Jesus was this long awaited Messiah after him having been crucified, what they were then in fact saying is that the long awaited Messiah was cursed by God and condemned to hang on a cross like a common criminal. That Paul considered seriously blasphemous, scholar Martin Hengel captures this saying that “The social stigma and disgrace associated with crucifixion in the Roman world can hardly be overstated”.

To this Paul admits after his radical conversion, writing that the “Jews demand signs and Greeks look for wisdom, but we preach Christ crucified: a stumbling block to Jews and foolishness to Gentiles” (1 Cor.1:21-22, emphasis mine).

Jesus also became a curse: “Christ redeemed us from the curse of the Law, having become a curse for us—for it is written, “CURSED IS EVERYONE WHO HANGS ON A TREE” (Gal 3:13, emphasis mine). Following this line of Jewish thought philosopher William Craig affirms that “Jesus’ crucifixion was something the early church struggled to overcome, not something it invented. Jesus’ crucifixion is one datum upon which all historical scholars, even the most radical, agree”.

Thus, preaching the early Christian message of the crucified and resurrected Jesus was certainly tough, and even tougher for many Jews to accept. One could certainly point out that unless Jesus really did in fact appear to Paul then this is very hard to explain away. Something dramatic certainly happened to Paul on his voyage to Damascus where the resurrected Jesus allegedly appeared to him.

Such a dramatic change in Paul’s behaviour, from persecutor to Christ follower, demands an explanation. Even the skeptical scholar Bart Ehrman believes that “Paul was undoubtedly the most important convert in the history of the Christian religion”.

There several other reasons as to why scholars are convinced on historical grounds of Paul’s conversion and allegiance to the risen Jesus.

1. Paul admits to persecuting the church

Firstly, the fact that we have and can determine Paul’s authentic epistles goes a long way as historical proof. Paul’s accounts thus provide early eyewitness testimony of his experience of Jesus and those close to Jesus. Of course, as we briefly saw above, Paul himself admits to persecuting the early church in his authentic epistles (1Cor. 15:9-10; Gal. 1:12-16, 22-23; Phil. 3:6-7).

This is further confirmed by Luke’s attestation in the book of Acts where Sual (Paul) “began ravaging the church, entering house after house, and dragging off men and women, he would put them in prison” (8:3). Luke also reports that Paul sanctioned the stoning of Stephen and thereby his death (8:1). Thus Paul’s persecuting of the early church enjoys both his self-admittance and multiple & independent attestation by being attested in at least two or more sources (Paul’s authentic letters & Acts).

2. This would be embarrassing to admit as a Christian, adding to its historicity

Next, Paul’s early Christian persecuting passes the criterion of embarrassment. Paul was self-admittedly a staunch enemy of the early church, and as he admits in 1 Corinthians 15:9 he viewed himself as the “least of the apostles, unworthy to be called an apostle because I persecuted the church of God.”

To Paul such persecution on his behalf ashamed him, and certainly brought with it great embarrassment, and thus this is not a story that he, or Luke, would have invented. The persecution that he sanctioned surely damaged his reputation and credibility, and he would have felt it.

3. Pauls willingness to suffer and die for Jesus

Thirdly, Paul lived his post-conversion life with a willingness to suffer and be persecuted for the message of Jesus. This is quite the dramatic change considering that his pre-conversion life had him persecuting and killing Christians. Not only did Paul suffer abuse, persecution, heartache, and isolation but he was also later martyred. On several occasions Paul was incarcerated, while other times he endured beatings (2 Cor. 11:24-27).

Paul was clearly willing to suffer for his faith as is multiply & independently attested. From our early New Testament writings Paul’s suffering is attested by his authentic letters (1 Corinthians etc.), disputed letters (2 Timothy etc.) and by Acts.

That is at least three independent traditions attesting to his persecution and willingness to suffer for the risen Jesus. We should clarify one detail, however. To have two or three independent sources on Paul’s suffering depends on whether or not one holds that 2 Timothy is an authentic or disputed epistle of Paul’s. According to roughly 80% of scholars 2 Timothy was not authored by Paul.

We will accept this consensus, and therefore we have three independent sources from within our New Testament attesting to the persecution and suffering of Paul. According to theologian Chris Price:

“Most striking perhaps is that fact that Jesus appeared to Paul. Paul hated Christians and was hell-bent on destroying the church. What transformed him from a persecutor of Christians to a pastor, who was willing to endure extraordinary hardship to proclaim the Gospel? Paul claimed it was the resurrection. This also indicates that Jesus didn’t just appear to friends or followers who might have been predisposed to think high and exalted things about him. Christ appeared to skeptics (James) and unbelievers (Paul) and they were convinced based on the reality of the resurrection”.

Nonetheless, beyond our three independent New Testament sources we have further confirmation of Paul’s sufferings and eventual death at the hands of the Romans. Clement of Rome tells us that “[Paul] after being seven times thrown into captivity, compelled to flee, and stoned…and suffered martyrdom under the prefects”.

This is early as Clement was writing around the mid-90’s AD, thus putting it on par with our final NT writings of John and Revelation. Further, Polycarp attests to Paul’s martyrdom (6), as does Tertullian who tells us that “Paul was beheaded”. Later, Eusebius quotes Dionysius of Corinth as well as Origin regarding Paul’s martyrdom.

Thus, in concluding our brief investigation of Paul, multiple & independent sources suggest a high probability of Paul’s willingness to suffer and his eventual martyrdom. The fact that Paul himself admits to his own received persecution, and that he also persecuted the church prior to his conversion passes the criterion of embarrassment and thus suggests it is certainly historical.

Like James, Paul’s radical conversion to Jesus’ cause that ended in suffering, persecution and eventual death demands explanation. Of course the best explanation is Paul’s own one: that the risen Jesus had appeared to him convincing him that he had been raised from the dead.