Ecclesiastes 4:5 Better one handful with tranquillity (Listen to, Dramatized or Read) 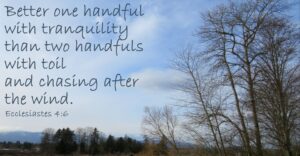 Again I looked and saw all the oppression that was taking place under the sun: I saw the tears of the oppressed— and they have no comforter; power was on the side of their oppressors— and they have no comforter.
And I declared that the dead, who had already died, are happier than the living, who are still alive.
But better than both is he who has not yet been, who has not seen the evil that is done under the sun.
And I saw that all labor and all achievement spring from man’s envy of his neighbor. This too is meaningless, a chasing after the wind.
The fool folds his hands and ruins himself.
Better one handful with tranquillity than two handfuls with toil and chasing after the wind.
Again I saw something meaningless under the sun:
There was a man all alone; he had neither son nor brother. There was no end to his toil, yet his eyes were not content with his wealth. “For whom am I toiling,” he asked, “and why am I depriving myself of enjoyment?” This too is meaningless— a miserable business!
Two are better than one, because they have a good return for their work:
If one falls down, his friend can help him up. But pity the man who falls and has no one to help him up!
Also, if two lie down together, they will keep warm. But how can one keep warm alone?
Though one may be overpowered, two can defend themselves. A cord of three strands is not quickly broken.
Better a poor but wise youth than an old but foolish king who no longer knows how to take warning.
The youth may have come from prison to the kingship, or he may have been born in poverty within his kingdom.
I saw that all who lived and walked under the sun followed the youth, the king’s successor.
There was no end to all the people who were before them. But those who came later were not pleased with the successor. This too is meaningless, a chasing after the wind.

GNT … Fools will … starve to death. Yet a very little food eaten in peace is better than twice as much earned from overwork and chasing the wind’

It’s better to spend time with your family and working for the Kingdom of God than it is to work hard, don’t miss out on family time and always have time for God’s work.