1 Corinthians 6:9 the wicked will not inherit the kingdom of God (Listen to, Dramatized or Read) 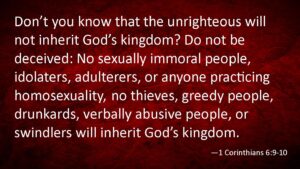 If any of you has a dispute with another, dare he take it before the ungodly for judgment instead of before the saints?
1Do you not know that the saints will judge the world? And if you are to judge the world, are you not competent to judge trivial cases?
Do you not know that we will judge angels? How much more the things of this life!
Therefore, if you have disputes about such matters, appoint as judges even men of little account in the church!
I say this to shame you. Is it possible that there is nobody among you wise enough to judge a dispute between believers?
But instead, one brother goes to law against another—and this in front of unbelievers!
The very fact that you have lawsuits among you means you have been completely defeated already. Why not rather be wronged? Why not rather be cheated?
Instead, you yourselves cheat and do wrong, and you do this to your brothers.
Do you not know that the wicked will not inherit the kingdom of God? Do not be deceived: Neither the sexually immoral nor idolaters nor adulterers nor male prostitutes nor homosexual offenders nor thieves nor the greedy nor drunkards nor slanderers nor swindlers will inherit the kingdom of God.
And that is what some of you were. But you were washed, you were sanctified, you were justified in the name of the Lord Jesus Christ and by the Spirit of our God.
“Everything is permissible for me”—but not everything is beneficial. “Everything is permissible for me”—but I will not be mastered by anything.
“Food for the stomach and the stomach for food”—but God will destroy them both. The body is not meant for sexual immorality, but for the Lord, and the Lord for the body.
By his power God raised the Lord from the dead, and he will raise us also.
Do you not know that your bodies are members of Christ himself? Shall I then take the members of Christ and unite them with a prostitute? Never!
Do you not know that he who unites himself with a prostitute is one with her in body? For it is said, “The two will become one flesh.”
But he who unites himself with the Lord is one with him in spirit.
Flee from sexual immorality. All other sins a man commits are outside his body, but he who sins sexually sins against his own body.
Do you not know that your body is a temple of the Holy Spirit, who is in you, whom you have received from God? You are not your own; you were bought at a price. Therefore, honor God with your body.

GNT … and such were some of you. But you are washed, but you are sanctified, … you are justified in the name of the Lord Jesus, & by the Spirit of our God’

That is how God sees us, Washed, Sanctified and Justified by the Cross.