1 Corinthians 15:54 O death, is your sting (Listen to, Dramatized or Read) 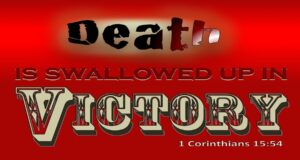 GNT … Your bodies are weak & die. But they will be changed to bodies that are eternal. Death has lost the battle! Where is its victory? Where is its sting?’

Think about it, the worst thing that can happen to you now is that you die, but then you go home to live with Jesus. Amen.