1 Corinthians 3:19 the wisdom of this world is foolishness (Listen to, Dramatized or Read) 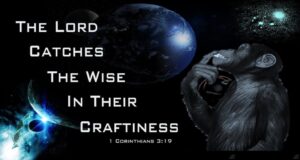 Brothers, I could not address you as spiritual but as worldly—mere infants in Christ.
I gave you milk, not solid food, for you, were not yet ready for it. Indeed, you are still not ready.
You are still worldly. For since there is jealousy and quarreling among you, are you not worldly? Are you not acting like mere men?
For when one says, “I follow Paul,” and another, “I follow Apollos,” are you not mere men?
What, after all, is Apollos? And what is Paul? Only servants, through whom you came to believe—as the Lord has assigned to each his task.
I planted the seed, Apollos watered it, but God made it grow.
So, neither he who plants, nor he who waters is anything, but only God, who makes things grow.
The man who plants and the man who waters have one purpose, and each will be rewarded according to his own labor.
For we are God’s fellow workers; you are God’s field, God’s building.
By the grace God has given me, I laid a foundation as an expert builder, and someone else is building on it. But each one should be careful how he builds.
For no one can lay any foundation other than the one already laid, which is Jesus Christ.
If any man builds on this foundation using gold, silver, costly stones, wood, hay or straw, his work will be shown for what it is because the Day will bring it to light. It will be revealed with fire, and the fire will test the quality of each man’s work.
If what he has built survives, he will receive his reward.
If it is burned up, he will suffer loss; he himself will be saved, but only as one escaping through the flames.
Don’t you know that you yourselves are God’s temple and that God’s Spirit lives in you?
If anyone destroys God’s temple, God will destroy him; for God’s temple is sacred, and you are that temple.
Do not deceive yourselves. If any one of you thinks he is wise by the standards of this age, he should become a “fool” so that he may become wise.
For the wisdom of this world is foolishness in God’s sight. As it is written: “He catches the wise in their craftiness”; and again, “The Lord knows that the thoughts of the wise are futile.”
So then, no more boasting about men! All things are yours, whether Paul or Apollos or Cephas or the world or life or death or the present or the future—all are yours, and you are of Christ, and Christ is of God.

GNT … God catches the wise trying to outsmart Him… The Lord knows that plans made by people are useless. So stop bragging about what anyone has done…’

No one lives forever, be wise and make plans that revolve around Jesus.