1 Corinthians 7:19 Circumcision is nothing (Listen to, Dramatized or Read) 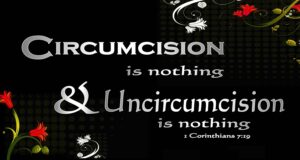 GNT … Being one way or another isn’t really what matters. The important thing is to obey God’s words. Don’t try to change what you were when God chose you’

God chose you for who you are, don’t change yourself, use everything about yourself to glorify Jesus by obeying his words.