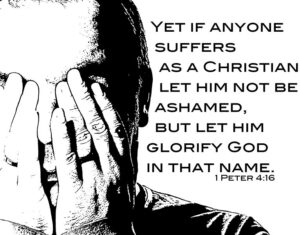 Therefore, since Christ suffered in his body, arm yourselves also with the same attitude because he who has suffered in his body is done with sin.
As a result, he does not live the rest of his earthly life for evil human desires, but rather for the will of God.
For you, have spent enough time in the past doing what pagans choose to do—living in debauchery, lust, drunkenness, orgies, carousing and detestable idolatry.
They think it strange that you do not plunge with them into the same flood of dissipation, and they heap abuse on you.
But they will have to give account to him who is ready to judge the living and the dead.
For this, is the reason the gospel was preached even to those who are now dead, so that they might be judged according to men in regard to the body, but live according to God in regard to the spirit.
The end of all things is near. Therefore, be clear minded and self-controlled so that you can pray.
Above all, love each other deeply because love covers over a multitude of sins.
Offer hospitality to one another without grumbling.
Each one should use whatever gift he has received to serve others, faithfully administering God’s grace in its various forms.
If anyone speaks, he should do it as one speaking the very words of God. If anyone serves, he should do it with the strength God provides, so that in all things God may be praised through Jesus Christ. To him, be the glory and the power for ever and ever. Amen.
Suffering as a Christian
Dear friends, do not be surprised at the painful trial you are suffering, as though something strange were happening to you.
But rejoice that you participate in the sufferings of Christ, so that you may be overjoyed when his glory is revealed.
If you are insulted because of the name of Christ, you are blessed, for the Spirit of glory and of God rests on you.
If you suffer, it should not be as a murderer or thief or any other kind of criminal, or even as a meddler.
However, if you suffer as a Christian, do not be ashamed, but praise God that you bear that name.
For it is time for judgment to begin with the family of God; and if it begins with us, what will the outcome be for those who do not obey the gospel of God?
And, “If it is hard for the righteous to be saved, what will become of the ungodly and the sinner?”
So then, those who suffer according to God’s will should commit themselves to their faithful Creator and continue to do good.

GNT … Don’t be ashamed to suffer for being a Christian. Praise God that you belong to Him. God has already begun judging his own people…’