1 Timothy 4:12 set an example for the believers in speech, in life, in love, in faith and in purity. (Listen to, Dramatized or Read) 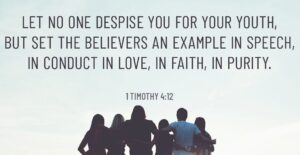 The Spirit clearly says that in later times some will abandon the faith and follow deceiving spirits and things taught by demons.
Such teachings come through hypocritical liars, whose consciences have been seared as with a hot iron.
They forbid people to marry and order them to abstain from certain foods, which God created to be received with thanksgiving by those who believe and who know the truth.
For everything God created is good, and nothing is to be rejected if it is received with thanksgiving because it is consecrated by the word of God and prayer.
If you point these things out to the brothers, you will be a good minister of Christ Jesus, brought up in the truths of the faith and of the good teaching that you have followed.
Have nothing to do with godless myths and old wives’ tales; rather, train yourself to be godly.
For physical training is of some value, but godliness has value for all things, holding promise for both the present life and the life to come.
This is a trustworthy saying that deserves full acceptance (and for this we labor and strive), that we have put our hope in the living God, who is the Savior of all men, and especially of those who believe.
Command and teach these things.
Don’t let anyone look down on you because you are young, but set an example for the believers in speech, in life, in love, in faith and in purity.
Until I come, devote yourself to the public reading of Scripture, to preaching and to teaching.
Do not neglect your gift, which was given you through a prophetic message when the body of elders laid their hands on you.
Be diligent in these matters; give yourself wholly to them, so that everyone may see your progress.
Watch your life and doctrine closely. Persevere in them because if you do, you will save both yourself and your hearers.

GNT … Don’t let anyone make fun of you, just because you’re young. Set an example for other followers by what you say and do, as well as by your love, faith & purity’

If you’re young, make it cool to be a Christian. Show your friends how Jesus has made you whole, clean and happy, don’t be embarrassed, talk about him always.