Colossians 2:13 alive with Christ (Listen to, Dramatized or Read) 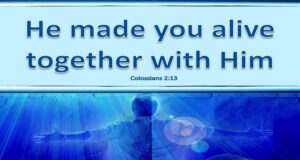 So then, just as you received Christ Jesus as Lord, continue to live in him, rooted and built up in him, strengthened in the faith as you were taught, and overflowing with thankfulness.
See to it that no one takes you captive through hollow and deceptive philosophy, which depends on human tradition and the basic principles of this world rather than on Christ.
For in Christ all the fullness of the Deity lives in bodily form, and you have been given fullness in Christ, who is the head over every power and authority.
In him you were also circumcised, in the putting off of the sinful nature, not with a circumcision done by the hands of men but with the circumcision done by Christ, having been buried with him in baptism and raised with him through your faith in the power of God, who raised him from the dead.
When you were dead in your sins and in the uncircumcision of your sinful nature, God made you alive with Christ. He forgave us all our sins, having canceled the written code, with its regulations, that was against us and that stood opposed to us; he took it away, nailing it to the cross.
And having disarmed the powers and authorities, he made a public spectacle of them, triumphing over them by the cross.

GNT … You were dead, you were sinful & not one of God’s people. But God made you alive, he forgave all our sins, wiped out the charges that were against you…’

You are forgiven, you are alive, how good is it to know all your sins are gone and wiped out, keep the faith and share his works in you today to anyone who will listen.