1 Peter 2:24 by his wounds you have been healed (Listen to, Dramatized or Read) 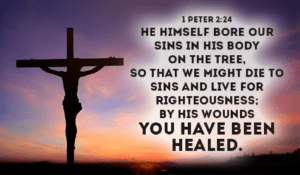 GNT … Jesus carried the burden of our sins and was nailed to the cross, so we would stop sinning and start living rite. By his cuts and bruises you’re healed’

Share this message today to someone who needs to hear it.