Ephesians 4:26 Do not let the sun go down while you are still angry (Listen to, Dramatized or Read) 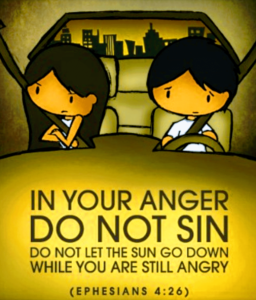 As a prisoner for the Lord, then, I urge you to live a life worthy of the calling you have received.
Be completely humble and gentle; be patient, bearing with one another in love.
Make every effort to keep the unity of the Spirit through the bond of peace.
There is one body and one Spirit—just as you were called to one hope when you were called—one Lord, one faith, one baptism; one God and Father of all, who is over all and through all and in all.
But to each one of us grace has been given as Christ apportioned it.
This is why it says: “When he ascended on high, he led captives in his train and gave gifts to men.”
(What does “he ascended” mean except that he also descended to the lower, earthly regions?
He who descended is the very one who ascended higher than all the heavens, in order to fill the whole universe.)
It was he who gave some to be apostles, some to be prophets, some to be evangelists, and some to be pastors and teachers, to prepare God’s people for works of service, so that the body of Christ may be built up until we all reach unity in the faith and in the knowledge of the Son of God and become mature, attaining to the whole measure of the fullness of Christ.
Then we will no longer be infants, tossed back and forth by the waves, and blown here and there by every wind of teaching and by the cunning and craftiness of men in their deceitful scheming.
Instead, speaking the truth in love, we will in all things grow up into him who is the Head, that is, Christ.
From him the whole body, joined and held together by every supporting ligament, grows and builds itself up in love, as each part does its work.

So, I tell you this, and insist on it in the Lord, that you must no longer live as the Gentiles do, in the futility of their thinking.
They are darkened in their understanding and separated from the life of God because of the ignorance that is in them due to the hardening of their hearts.
Having lost all sensitivity, they have given themselves over to sensuality so as to indulge in every kind of impurity, with a continual lust for more.
You, however, did not come to know Christ that way.
Surely, you heard of him and were taught in him in accordance with the truth that is in Jesus.
You were taught, with regard to your former way of life, to put off your old self, which is being corrupted by its deceitful desires; to be made new in the attitude of your minds; and to put on the new self, created to be like God in true righteousness and holiness.
Therefore, each of you must put off falsehood and speak truthfully to his neighbor, for we are all members of one body.
“In your anger do not sin”: Do not let the sun go down while you are still angry, and do not give the devil a foothold.
He who has been stealing must steal no longer, but must work, doing something useful with his own hands, that he may have something to share with those in need.
Do not let any unwholesome talk come out of your mouths, but only what is helpful for building others up according to their needs, that it may benefit those who listen.
And do not grieve the Holy Spirit of God, with whom you were sealed for the day of redemption.
Get rid of all bitterness, rage and anger, brawling and slander, along with every form of malice.
Be kind and compassionate to one another, forgiving each other, just as in Christ God forgave you.

GNT … Paul used two different Greek words translated anger in the NIV. The first one, at the beginning of verse 26, means to be provoked to anger. It’s a passive word, indicating the anger is the effect of an outside action. The other one, at the end of the verse, means rage or wrath and is used only here in scripture. The KJV translates the first as anger and the second as wrath, but the idea is the same.   What begins as a reactive impression can quickly become an active expression.

It’s natural to feel anger over the flagrant violation of God’s laws in the world, both inside and outside the church. It’s bad enough when this hurts others, but when it’s directed at us personally, it’s even worse.  And when that anger turns to resentment (anger stored for future use) or causes us to respond in kind toward another person it becomes sin for two reasons. One, it puts us in God’s role of judgment, and two it causes us to presume that we’re better than the object of our resentment. That’s called pride.

Anger gives the devil a foothold (location or space) in our life. Footholds become strongholds (fortresses) and can be very difficult to demolish.  The anger that spews from them can compromise our witness, steal our joy, and impede our healing.  As the Lord’s brother said, Everyone should be quick to listen, slow to speak and slow to become angry, for man’s anger does not bring about the righteous life that God desires (James 1:19-20). Good advice.