2 Peter 2:19 Fake Freedom: for a man is a slave to whatever has mastered him (Listen to, Dramatized or Read) 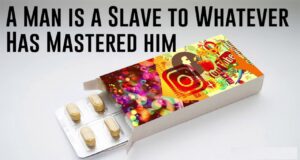 But there were also false prophets among the people, just as there will be false teachers among you. They will secretly introduce destructive heresies, even denying the sovereign Lord who bought them—bringing swift destruction on themselves.
Many will follow their shameful ways and will bring the way of truth into disrepute.
In their greed these teachers will exploit you with stories they have made up. Their condemnation has long been hanging over them, and their destruction has not been sleeping.
For if God did not spare angels when they sinned, but sent them to hell, putting them into gloomy dungeons to be held for judgment; if he did not spare the ancient world when he brought the flood on its ungodly people, but protected Noah, a preacher of righteousness, and seven others;  if he condemned the cities of Sodom and Gomorrah by burning them to ashes, and made them an example of what is going to happen to the ungodly;  and if he rescued Lot, a righteous man, who was distressed by the filthy lives of lawless men (for that righteous man, living among them day after day, was tormented in his righteous soul by the lawless deeds he saw and heard)— if this is so, then the Lord knows how to rescue godly men from trials and to hold the unrighteous for the day of judgment, while continuing their punishment.
This is especially true of those who follow the corrupt desire of the sinful nature and despise authority. Bold and arrogant, these men are not afraid to slander celestial beings; yet even angels, although they are stronger and more powerful, do not bring slanderous accusations against such beings in the presence of the Lord.
But these men blaspheme in matters they do not understand. They are like brute beasts, creatures of instinct, born only to be caught and destroyed, and like beasts they too will perish.
They will be paid back with harm for the harm they have done. Their idea of pleasure is to carouse in broad daylight. They are blots and blemishes, reveling in their pleasures while they feast with you.
With eyes full of adultery, they never stop sinning; they seduce the unstable; they are experts in greed—an accursed brood!
They have left the straight way and wandered off to follow the way of Balaam son of Beor, who loved the wages of wickedness.
But he was rebuked for his wrongdoing by a donkey—a beast without speech—who spoke with a man’s voice and restrained the prophet’s madness.
These men are springs without water and mists driven by a storm. Blackest darkness is reserved for them.
For they mouth empty, boastful words and, by appealing to the lustful desires of sinful human nature, they entice people who are just escaping from those who live in error.
They promise them freedom, while they themselves are slaves of depravity—for a man is a slave to whatever has mastered him.
If they have escaped the corruption of the world by knowing our Lord and Savior Jesus Christ and are again entangled in it and overcome, they are worse off at the end than they were at the beginning.
It would have been better for them not to have known the way of righteousness, than to have known it and then to turn their backs on the sacred command that was passed on to them.
Of them the proverbs are true: “A dog returns to its vomit,” and, “A sow that is washed goes back to her wallowing in the mud.”

Don’t worry, Be happy, Jesus is on your side, trust in him, he will save you from what is troubling you, just have faith!