Galatians 1:4 (Listen to, Dramatised or Read) 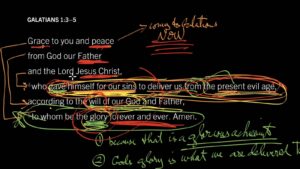 Paul, an apostle—sent not from men nor by man, but by Jesus Christ and God the Father, who raised him from the dead—and all the brothers with me, To the churches in Galatia:
Grace and peace to you from God our Father and the Lord Jesus Christ,  who gave himself  for our sins to rescue us from the present evil age, according to the will of our God and Father, to whom be glory for ever and ever. Amen.
I am astonished that you are so quickly deserting the one who called you by the grace of Christ and are turning to a different gospel—which is really no gospel at all. Evidently some people are throwing you into confusion and are trying to pervert the gospel of Christ.
But even if we or an angel from heaven should preach a gospel other than the one we preached to you, let him be eternally condemned!
As we have already said, so now I say again: If anybody is preaching to you a gospel other than what you accepted, let him be eternally condemned!
Am I now trying to win the approval of men, or of God? Or am I trying to please men? If I were still trying to please men, I would not be a servant of Christ.
I want you to know, brothers, that the gospel I preached is not something that man made up.
I did not receive it from any man, nor was I taught it; rather, I received it by revelation from Jesus Christ.
For you, have heard of my previous way of life in Judaism, how intensely I persecuted the church of God and tried to destroy it.
I was advancing in Judaism beyond many Jews of my own age and was extremely zealous for the traditions of my fathers.
But when God, who set me apart from birth and called me by his grace, was pleased to reveal his Son in me so that I might preach him among the Gentiles, I did not consult any man, nor did I go up to Jerusalem to see those who were apostles before I was, but I went immediately into Arabia and later returned to Damascus.
Then after three years, I went up to Jerusalem to get acquainted with Peter and stayed with him fifteen days.
I saw none of the other apostles—only James, the Lord’s brother.
I assure you before God that what I am writing you is no lie.
Later I went to Syria and Cilicia.
I was personally unknown to the churches of Judea that are in Christ.
They only heard the report: “The man who formerly persecuted us is now preaching the faith he once tried to destroy.”
And they praised God because of me.

GNT … In order to set you free from this present evil age, Christ gave himself for your sins, in obedience to the will of your God and Father’ – ‘Ga 2:19 The Law killed Him and freed you from its power, so you can live for God. You have been nailed to the cross with Christ…and now you live by faith…’

The Cross was the beginning of the end of this world, but also the heralding of the New world. It’s been all downhill since the cross unless you carry the cross proclaiming the Kingdom to come.