2 Corinthians 8:11 Now finish the work (Listen to, Dramatized or Read) 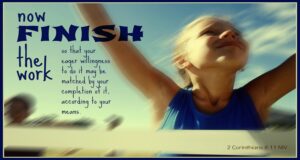 And now, brothers, we want you to know about the grace that God has given the Macedonian churches.
Out of the most severe trial, their overflowing joy and their extreme poverty welled up in rich generosity.
For I testify that they gave as much as they were able, and even beyond their ability. Entirely on their own, they urgently pleaded with us for the privilege of sharing in this service to the saints.
And they did not do as we expected, but they gave themselves first to the Lord and then to us in keeping with God’s will.
So we urged Titus, since he had earlier made a beginning, to bring also to completion this act of grace on your part.
But just as you excel in everything—in faith, in speech, in knowledge, in complete earnestness and in your love for us—see that you also excel in this grace of giving.
I am not commanding you, but I want to test the sincerity of your love by comparing it with the earnestness of others.
For you know the grace of our Lord Jesus Christ, that though he was rich, yet for your sakes he became poor, so that you through his poverty might become rich.
And here is my advice about what is best for you in this matter: Last year you were the first not only to give but also to have the desire to do so.
Now finish the work, so that your eager willingness to do it may be matched by your completion of it, according to your means.
For if the willingness is there, the gift is acceptable according to what one has, not according to what he does not have.
Our desire is not that others might be relieved while you are hard pressed, but that there might be equality.
At the present time your plenty will supply what they need, so that in turn their plenty will supply what you need. Then there will be equality, as it is written: “He who gathered much did not have too much, and he who gathered little did not have too little.”

GNT … On with it then, and finish the job! Be as eager to finish it as you were to plan it and do it with what you now have’ Be effective!

Once we start to live for Jesus, that’s when the evil one take notice of us and that’s when the attacks start to make you an Ineffective Christian. Fight back, be effective, stand tall, be bold, finish what you started, the battle is already won, we just need to claim the victory.