Romans 10:9 confess with your mouth, “Jesus is Lord, (Listen to, Dramatized or Read) 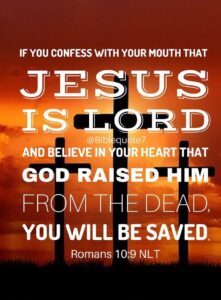 Brothers, my heart’s desire and prayer to God for the Israelites is that they may be saved.
For I can testify about them that they are zealous for God, but their zeal is not based on knowledge.
Since they did not know the righteousness that comes from God and sought to establish their own, they did not submit to God’s righteousness.
Rom 10:4 Christ is the end of the law so that there may be righteousness for everyone who believes.
The Message of Salvation to All
Moses describes in this way the righteousness that is by the law: “The man who does these things will live by them.”
Rom 10:6 But the righteousness that is by faith says: “Do not say in your heart, ‘Who will ascend into heaven?'” (that is, to bring Christ down) “or ‘Who will descend into the deep?'” (that is, to bring Christ up from the dead).
But what does it say? “The word is near you; it is in your mouth and in your heart,” that is, the word of faith we are proclaiming:
That if you confess with your mouth, “Jesus is Lord,” and believe in your heart that God raised him from the dead, you will be saved.
For it is with your heart that you believe and are justified, and it is with your mouth that you confess and are saved.
As the Scripture says, “Anyone who trusts in him will never be put to shame.”
For there is no difference between Jew and Gentile—the same Lord is Lord of all and richly blesses all who call on him, for, “Everyone who calls on the name of the Lord will be saved.”
How, then, can they call on the one they have not believed in? And how can they believe in the one of whom they have not heard? And how can they hear without someone preaching to them?
And how can they preach unless they are sent? As it is written, “How beautiful are the feet of those who bring good news!”
But not all the Israelites accepted the good news. For Isaiah says, “Lord, who has believed our message?”
Consequently, faith comes from hearing the message, and the message is heard through the word of Christ.
But I ask: Did they not hear? Of course, they did: “Their voice has gone out into all the earth, their words to the ends of the world.”
Again I ask: Did Israel not understand? First, Moses says, “I will make you envious by those who are not a nation; I will make you angry by a nation that has no understanding.”
And Isaiah boldly says, “I was found by those who did not seek me; I revealed myself to those who did not ask for me.”
But concerning Israel he says, “All day long I have held out my hands to a disobedient and obstinate people.”

GNT … There are two important points, which says, “If you confess with your mouth, ‘Jesus is Lord,’ and believe in your heart that God raised him from the dead, you will be saved.” The first is the Greek word translated confess. It means to acknowledge or agree. It’s a compound word whose roots mean to speak together, or to say the same thing. When we confess that Jesus is Lord, we’re agreeing that He is who the Bible shows Him to be, the one who came to die for our sins.

The second point is believing that God raised Him from the dead. After the resurrection, Jesus ascended to the Father to sit at His right hand. Since Jesus took upon Himself all the sins of mankind, and since sinful man cannot exist in God’s presence, the fact that Jesus is with the Father is proof that the penalty for all the sins of mankind was paid at the cross. If even one of our sins remained unpaid Jesus would still be in the tomb, and we would be without hope.