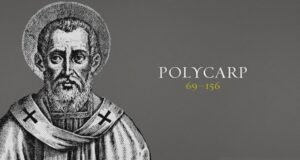 Some skeptics say Jesus did not exist, but by any historic standard, the man known as Jesus of Nazareth existed. If he did not exist, then neither did the Greek philosopher Socrates. We have no writings from Socrates himself. We only know of his existence through the writings of other people. But no one would doubt Socrates existed. We actually have more eyewitness accounts of Jesus’ existence than of Socrates’. Some, however, argue that because Jesus made claims of divinity, there must be extraordinary evidence — perhaps as to his divinity, but not for his historic existence.
We have to wipe a lot of people out of history to wipe Jesus out of history!

“Eighty and six years I have served Him, and He has done me no wrong,” said Polycarp, bishop of Smyrna, in A.D. 156 before climbing onto a pyre where Roman authorities would burn him to death. Eyewitnesses reported the local authorities respected Polycarp and begged him to recant his faith in Christ. He would not. The Romans did not even tie Polycarp to a post because they knew he would not flee the fire. Polycarp fed his captors, prayed over them and then climbed the pyre to die.

Authorities carted off Polycarp’s friend Ignatius, bishop of Antioch, and fed him to wild beasts in the Circus Maximus on July 6, 108. Ignatius had refused to renounce Christ. Histories of the time, their personal writings and the writings of others tell us Polycarp and Ignatius were students of the Apostle John. They vouched for him as the author of his gospel. John installed Polycarp as bishop of Smyrna, and the Apostle Peter placed Ignatius in charge of Antioch.

In A.D. 99, the Romans drowned their acquaintance Clement in the sea tied to an anchor for the same reason. Paul mentioned Clement in his letter to the Philippians, and history shows Clement interacted with Peter, Paul and John.

Clement, Ignatius and Polycarp were one generation removed from the direct eyewitnesses of Jesus. They were students of the Apostles. They vouched for the veracity of the apostolic letters that form the New Testament. They died refusing to reject Jesus as the Christ.

The Apostle John was Jesus’ best friend. We know this from Scripture. We also know this from Polycarp, Ignatius and others. They studied under John, recounted his stories of being with Jesus, including stories not in Scripture, and confirm John, Peter, Paul and others as eyewitnesses to Christ’s resurrection.

According to John, Jesus’ own disciples, perhaps like some reading this, rejected Jesus’ claims of divinity. At Jesus’ death, John had to care for Jesus’ mother because none of Jesus’ disciples went with Mary to the crucifixion. John, Luke, Paul and others tell us Jesus’ disciples then became leaders in the early Christian church.

Histories of the era recount that James and Jude, the disciples of Jesus, wrote the New Testament letters named after them. Both were executed for proclaiming Jesus as the risen Lord. In fact, the Romans ultimately exterminated the entire earthly discipleship of Jesus. family.

The leaders of Jerusalem respected James. The oral and written histories of the early Christian church recount that they asked James to publicly push back against claims of Jesus’ divinity. Instead, James proclaimed Jesus, who he had rejected prior to Jesus’ death, was Yahweh. The leaders of the city, enraged, carried James to the top of the temple wall in Jerusalem and threw him off to his death.

Jesus could have been a conman surrounded by other conmen. They, in turn, were willing to die to keep the con going and got others to die keeping the con going. Or there is something else. Dozens claimed to be the Christ, but only Jesus is remembered and worshiped as the Christ. Why?

Perhaps because it is true. I, however, cannot convince you more than that the historic evidence for his existence and the willingness of many to die for him are true. But if I am right, you can ask Jesus yourself. Take to your knees, and embrace the wonder of this season.