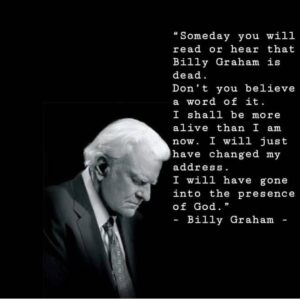 “Some day you will read or hear that Billy Graham is dead. Don’t you believe a word of it. I shall be more alive than I am now. I will just have changed my address. I will have gone into the presence of God.”

The Rev. Billy Graham, a North Carolina farmer’s son who preached to millions in stadium events he called crusades, becoming a pastor to presidents and the nation’s best-known Christian evangelist for more than 60 years.

Mr. Graham spread his influence across the country and around the world through a combination of religious conviction, commanding stage presence and shrewd use of radio, television and advanced communication technologies.

Graham’s popular appeal was the result of his extraordinary charisma, his forceful preaching, and his simple, homespun message: anyone who repents of sins and accepts Jesus Christ will be saved.

Graham is said to have preached in person to more people than anyone else in history, an assertion that few would challenge. His evangelical crusades around the world, his television appearances and radio broadcasts, his friendships with presidents, and his unofficial role as spokesman for America’s evangelicals made him one of the most recognized religious figures of the 20th century.