St. Basil the Great (Listen to or Read) 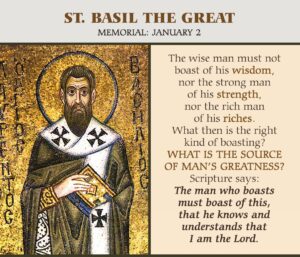 He was an influential theologian who supported the Nicene Creed and opposed the heresies of the early Christian church, fighting against both Arianism and the followers of Apollinaris of Laodicea. His ability to balance his theological convictions with his political connections made Basil a powerful advocate for the Nicene position.

Considered a saint by the traditions of both Eastern and Western Christianity, his work as a theologian, Basil was known for his care of the poor and underprivileged. Patron of hospital administrators Died: 379.

Matthew 25:31
“When the Son of Man comes as King and all the angels with him, he will sit on his royal throne, and the people of all the nations will be gathered before him. Then he will divide them into two groups, just as a shepherd separates the sheep from the goats. He will put the righteous people at his right and the others at his left.

Then the King will say to the people on his right, ‘Come, you that are blessed by my Father! Come and possess the kingdom which has been prepared for you ever since the creation of the world.

I was hungry and you fed me, thirsty and you gave me a drink; I was a stranger and you received me in your homes, naked and you clothed me; I was sick and you took care of me, in prison and you visited me