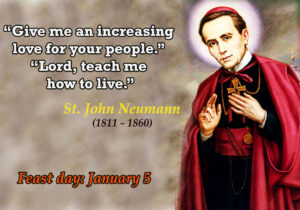 Born 1811 – Died 1860
This American saint was born in Bohemia in 1811. He was looking forward to being ordained in 1835 when the bishop decided there would be no more ordinations.

But John didn’t give up. He had learned English by working in a factory with English-speaking workers, so he wrote to the bishops in America. Finally, the bishop in New York agreed to ordain him. In order to follow God’s call to the priesthood John would leave his home forever and travel across the ocean to a new and rugged land.

John’s parish in western New York stretched from Lake Ontario to Pennsylvania. His church had no steeple or floor but that didn’t matter because John spent most of his time travelling from village to village, climbing mountains to visit the sick, staying in garrets and taverns to teach, and celebrating the Mass at kitchen tables.

John never lost his love and concern for the people — something that may have bothered the elite of Philadelphia.

Once on a visit to Germany, he came back to the house he was staying in soaked by rain. When his host suggested he change his shoes, John remarked, “The only way I could change my shoes is by putting the left one on the right foot and the right one on the left foot. This is the only pair I own.”

The Parable of the Gold Coins Luke 19:11-27
“There was once a man of high rank who was going to a country far away to be made king, after which he planned to come back home. Before he left, he called his ten servants and gave them each a gold coin and told them, ‘See what you can earn with this while I am gone.’ Now, his own people hated him, and so they sent messengers after him to say, ‘We don’t want this man to be our king.’

You know that I am a hard man, taking what is not mine and reaping what I have not planted. Well, then, why didn’t you put my money in the bank? Then I would have received it back with interest when I returned.’

Then he said to those who were standing there, ‘Take the gold coin away from him and give it to the servant who has ten coins.’

But they said to him, ‘Sir, he already has ten coins!’ ‘I tell you,’ he replied, ‘that to those who have something, even more will be given; but those who have nothing, even the little that they have will be taken away from them.

Now, as for those enemies of mine who did not want me to be their king, bring them here and kill them in my presence.’