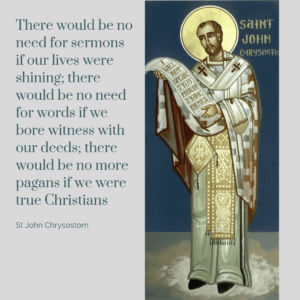 An early Church Father, biblical interpreter, and archbishop of Constantinople. The zeal and clarity of his preaching, which appealed especially to the common people, earned him the Greek surname meaning “golden-mouthed.” His tenure as archbishop was stormy, and he died in exile. His relics were brought back to Constantinople about 438, and he was later declared a doctor (teacher) of the church.

St. John was the son of a high-ranking military officer and was raised as a Christian by his widowed mother. Although he studied law under a distinguished pagan rhetorician, he gave up his profession to study theology, ultimately becoming an ascetic hermit-monk.

When his health gave way, he returned to Antioch and became an ordained deacon in 381 and a priest in 386. Over the next 12 years he established himself as a great preacher, and his homilies (sermons) were well regarded.

In 387 St. John calmed the riotous citizens of Antioch, who had treated the images of the sacred emperors with disrespect and were threatened with reprisals, with a famous course of sermons known as “the homilies on the statues.”

His brilliant exposition and moral teaching have the note of universality; his words remain forceful, and his humorous sallies are still as pungent as when they provoked laughter in the congregations of Antioch and Constantinople. He was concerned, above all, for the spiritual and temporal welfare of the needy and oppressed. He was not alone among the early Fathers in speaking out against the abuse of wealth. He believed that personal property is not strictly private but a trust. In his eloquent, moving, and repeated insistence on almsgiving, he frequently taught that what was superfluous to one’s reasonable needs ought to be given away.

In 398 St. John was called to Constantinople to be its archbishop, much against his will. There he gained a large following among the people, but his teachings on the misuse of riches angered the wealthy and influential. An unscrupulous alliance against him was made by the wife of the then Eastern Roman emperor and the archbishop of the rival see of Alexandria.
In 403 a synod was held inditing John on numerous charges, many of which were purely frivolous or vexatious. John refused to appear before the synod, whereupon condemning himself. The emperor therefore banished him from the city, recalled him at once, and finally banished him again the following year.

St John was a superb orator, though, in his sermons he seldom used allegory but spoke plainly and combined penetration into the meaning of Scripture with a genius for its personal application. Each of his sermons had its moral or social lesson. His works consist of numerous scriptural homilies and other sermons, together with some treatises and letters.

GNT … St John the “golden-mouthed” is one of my favourite Early Church fathers, if he were alive today, our churches would have him committed into an asylum; as he would shame every one of them because of the wealth they have accumulated and their use of it.

If only he or someone like him were around today!