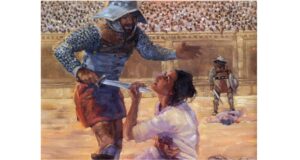 Christian saint and martyr. Name variations: Born in Thuburbo, a small town in northern Africa, in 181; executed Mar 7, 203, in the amphitheater at Carthage;

Found guilty of treason, having publicly professed her Christianity; ordered put to death by Hilarianus (then governor of Africa) during the games; wrote a diary of her last days, now known as “The Martyrdom of Saints Perpetua and Felicitas.”

The early Church preserved her manuscript, The Martyrdom of Perpetua because it is one of the oldest and most descriptive accounts of death for Christ. It is also the earliest known document written by a Christian woman.

Anyone who has ever suffered for their faith or has been oppressed by the powerful, can carry on a conversation and feel a bond with Perpetua. In fact, in the introduction to her story, we read that it was “written expressly for God’s honor and man’s encouragement” to testify to the grace of God and to edify God’s grace-bought people.

Of course, even reading the word “martyr” likely causes us to imagine that Perpetua was a spiritual “super woman” whose life and ministry we could not possibly emulate. The story of her life, however, demonstrates just the opposite.

The Story of Her Life

Perpetua lived in Carthage in North Africa during the persecution of Christians under Septimius Severus. At the time of her arrest in 202 AD, she was a twenty-one-year-old mother of an infant son. Born into a wealthy, prominent, but unbelieving family, Perpetua was a recent convert with a father who continually attempted to weaken her faith and a husband who was, for reasons unknown to us, out of the picture. Nothing in Perpetua’s situation or background prepared her for the titanic spiritual struggle God called her to face.

Perpetua, her brother, her servant (Felicitas), and two other new converts were discipled by Saturus. We learn from Perpetua of the arrest of all these faithful followers of Christ.

“At this time we were baptized, and the Spirit instructed me not to request anything from the baptismal waters except endurance of physical suffering. A few days later we were imprisoned.”

A Light in the Darkness: Experiencing the Pain of Others

Perpetua candidly faces her fears and expresses her suffering.

“I was terrified because never before had I experienced such darkness. What a terrible day! Because of crowded conditions and rough treatment by the soldiers the heat was unbearable. My condition was aggravated by my anxiety for my baby.”

This very human woman exudes superhuman strength. In the midst of her agony, she empathizes with, and consoles others. Her father, completely exhausted from his anxiety, came from the city to beg Perpetua to recant and offer sacrifice to the emperor.

“I was very upset because of my father’s condition. He was the only member of my family who would find no reason for joy in my suffering. I tried to comfort him saying, ‘Whatever God wants at this tribunal will happen, for remember that our power comes not from ourselves but from God.’ But utterly dejected, my father left me.”

On the day of Perpetua’s final hearing before being martyred for her faith in 203 AD, the guards rushed Perpetua to the prisoners’ platform. Her father appeared with her infant son, guilting her and imploring her to “have pity on your son!” He caused such an uproar, that Governor Hilarion ordered him thrown out, and he was beaten with a rod.

Perpetua writes of this horrible incident.

“My father’s injury hurt me as much as if I myself had been beaten. And I grieved because of his pathetic old age.”

Perpetua provides a classic portrait of biblical empathy. Her as if experience of her father’s pain is the essence of sustaining soul care—making the agony of others our very own.

Perpetua not only finds in Christ the strength to empathize with her father, she also summons Christ’s power to console and encourage her family and her fellow martyrs.

“In my anxiety for the infant I spoke to my mother about him, tried to console my brother and asked that they care for my son. I suffered intensely because I sensed their agony on my account. These were the trials I had to endure for many days.”

Incredibly, Perpetua’s greatest pain was her ache for others who hurt for her!

A few days passed after the hearing and before the battle in the arena commenced. During this interval, Perpetua witnessed to her persecutors and ministered to other detainees.

“Pudens, the official in charge of the prison (the official who had gradually come to admire us for our persistence), admitted many prisoners to our cell so that we might mutually encourage each other.”

Facing death, Perpetua shared words of life with all who would listen.

Felicitas (Perpetua’s friend and fellow prisoner) was in her eighth month of pregnancy. As the day of the contest approached, she became very distressed that her martyrdom might be delayed, since the law forbade the execution of a pregnant woman. An eyewitness to their eventual death shares his account of their journey together.

“Her friends in martyrdom were equally sad at the thought of abandoning such a good friend to travel alone on the same road to hope. And so, two days before the contest, united in grief they prayed to the Lord.”

Immediately after their prayers, her labor pains began and Felicitas gave birth to a girl, whom one of her sisters reared as her own.

This eyewitness records their witness for Christ to the very end.

“On the day before the public games, as they were eating the last meal commonly called the free meal, they tried as much as possible to make it instead an agape. In the same spirit they were exhorting the people, warning them to remember the judgment of God, asking them to be witnesses of the prisoners’ joy in suffering, and ridiculing the curiosity of the crowd. . . . Then they all left the prison amazed, and many of them began to believe.”

To the very end, Perpetua maintains her perpetual persistence.

“The day of their victory dawned, and with joyful countenances they marched from the prison to the arena as though on their way to heaven. If there was any trembling, it was from joy, not fear. Perpetua followed with a quick step as a true spouse of Christ, the darling of God, her brightly flashing eyes quelling the gaze of the crowd.”

To them, she was nothing but entertainment. To Christ, she was His bride.

Stubbornly Resisting to the End

“But that noble woman stubbornly resisted even to the end. She said, ‘We’ve come this far voluntarily in order to protect our rights, and we’ve pledged our lives not to recapitulate on any such matter as this. We made this agreement with you.’ Injustice bowed to justice and the guard conceded that they could enter the arena in their ordinary dress. Perpetua was singing victory psalms as if already crushing the head of the Egyptian.”

Here we witness not only Perpetua’s courageous example of persistence, but also her model of biblical confrontation. She provides riveting testimony to Christ’s power at work in the inner life of a Christian woman whose spirit could never be overpowered.