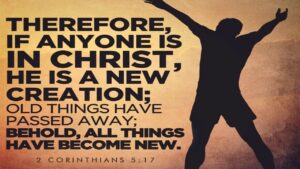 Now we know that if the earthly tent we live in is destroyed, we have a building from God, an eternal house in heaven, not built by human hands.
Meanwhile, we groan, longing to be clothed with our heavenly dwelling because when we are clothed, we will not be found naked.
For while, we are in this tent, we groan and are burdened because we do not wish to be unclothed but to be clothed with our heavenly dwelling, so that what is mortal may be swallowed up by life.
Now it is God who has made us for this very purpose and has given us the Spirit as a deposit, guaranteeing what is to come.
Therefore, we are always confident and know that as long as we are at home in the body we are away from the Lord.
We live by faith, not by sight.
We are confident, I say, and would prefer to be away from the body and at home with the Lord.
So, we make it our goal to please him, whether we are at home in the body or away from it.
For we must all appear before the judgment seat of Christ, that each one may receive what is due him for the things done while in the body, whether good or bad.
Since, then, we know what it is to fear the Lord, we try to persuade men. What we are is plain to God, and I hope it is also plain to your conscience.
We are not trying to commend ourselves to you again, but are giving you an opportunity to take pride in us, so that you can answer those who take pride in what is seen rather than in what is in the heart.
If we are out of our mind, it is for the sake of God; if we are in our right mind, it is for you.
For Christ’s love compels us because we are convinced that one died for all, and therefore all died.
And he died for all, that those who live should no longer live for themselves but for him, who died for them and was raised again.
So from now on we regard no one from a worldly point of view. Though we once regarded Christ in this way, we do so no longer.
Therefore, if anyone is in Christ, he is a new creation; the old has gone, the new has come!
All this is from God, who reconciled us to himself through Christ and gave us the ministry of reconciliation: that God was reconciling the world to himself in Christ, not counting men’s sins against them. And he has committed to us the message of reconciliation.
We are therefore Christ’s ambassadors, as though God were making his appeal through us. We implore you on Christ’s behalf: Be reconciled to God.
God made him who had no sin to be sin for us, so that in him we might become the righteousness of God.

GNT … We know what it means to fear the Lord, and so we try to persuade others.
God knows us completely, and I hope that in your hearts you know me as well.
We are not trying again to recommend ourselves to you; rather, we are trying to give you a good reason to be proud of us, so that you will be able to answer those who boast about people’s appearance and not about their character.
Are we really insane? It is for God’s sake.
Or are we sane? Then it is for your sake.
We are ruled by the love of Christ, now that we recognize that one man died for everyone, which means that they all share in his death.
He died for all, so that those who live should no longer live for themselves, but only for him who died and was raised to life for their sake.
No longer, then, do we judge anyone by human standards.
Even if at one time we judged Christ according to human standards, we no longer do so.
Anyone who is joined to Christ is a new being; the old is gone, the new has come.
All this is done by God, who through Christ changed us from enemies into his friends and gave us the task of making others his friends also.
Our message is that God was making all human beings his friends through Christ.
God did not keep an account of their sins, and he has given us the message which tells how he makes them his friends.
Here we are, then, speaking for Christ, as though God himself were making his appeal through us.
We plead on Christ’s behalf: let God change you from enemies into his friends!
Christ was without sin, but for our sake God made him share our sin in order that in union with him we might share the righteousness of God.

It was of small importance in Paul’s eyes what his critics thought of him.
He desired only to please his supreme Lord, whether he lived or died, was considered cold and staid or hot and impassioned.
He was overmastered by his love of Christ.
This may have been the sense of Christ’s love to his unworthy self, or the emotion that burned in his soul toward Christ, or the very love of Christ received into his heart, as a tiny creek on the shore receives the pulse of the ocean tide.
The Apostle had arrived at the deliberate conclusion and judgment that “all” who realized what Christ had done for them (and he among them) must live with as much devotion toward Him as others toward themselves.
A new world had been opened by Christ’s resurrection.
All things had become new.
Let us live in daily touch with that world of faith and glory, refusing to be judged by the old standards.
It is clear that the reconciliation of the world is as complete as God can make it, but it is for us to urge men to fall in Love with Christ and accept God’s proposals.