Mark 14:32 Jesus Prays in Gethsemane; And they laid their hands on him, and took him.(Listen to, Dramatized or Read) 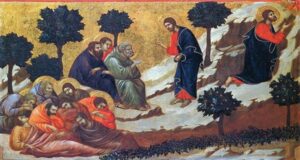 And they came to a place which was named Gethsemane: and he saith to his disciples, Sit ye here, while I shall pray.
And he taketh with him Peter and James and John, and began to be sore amazed, and to be very heavy;
And saith unto them, My soul is exceeding sorrowful unto death: tarry ye here, and watch.
And he went forward a little, and fell on the ground, and prayed that, if it were possible, the hour might pass from him.
And he said, Abba, Father, all things are possible unto thee; take away this cup from me: nevertheless not what I will, but what thou wilt.
And he cometh, and findeth them sleeping, and saith unto Peter, Simon, sleepest thou? couldest not thou watch one hour?
Watch ye and pray, lest ye enter into temptation. The spirit truly is ready, but the flesh is weak.
And again he went away, and prayed, and spake the same words.
And when he returned, he found them asleep again, (for their eyes were heavy,) neither wist they what to answer him.
And he cometh the third time, and saith unto them, Sleep on now, and take your rest: it is enough, the hour is come; behold, the Son of man is betrayed into the hands of sinners.
Rise up, let us go; lo, he that betrayeth me is at hand.
And immediately, while he yet spake, cometh Judas, one of the twelve, and with him a great multitude with swords and staves, from the chief priests and the scribes and the elders.
And he that betrayed him had given them a token, saying, Whomsoever I shall kiss, that same is he; take him, and lead him away safely.
And as soon as he was come, he goeth straightway to him, and saith, Master, master; and kissed him.
And they laid their hands on him, and took him.
And one of them that stood by drew a sword, and smote a servant of the high priest, and cut off his ear.
And Jesus answered and said unto them, Are ye come out, as against a thief, with swords and with staves to take me?
I was daily with you in the temple teaching, and ye took me not: but the scriptures must be fulfilled.
And they all forsook him, and fled.

Peter’s Denial – Luke 22:54
Then took they him, and led him, and brought him into the high priest’s house. And Peter followed afar off.
And when they had kindled a fire in the midst of the hall, and were set down together, Peter sat down among them.
But a certain maid beheld him as he sat by the fire, and earnestly looked upon him, and said, This man was also with him.
And he denied him, saying, Woman, I know him not.
And after a little while another saw him, and said, Thou art also of them. And Peter said, Man, I am not.
And about the space of one hour after another confidently affirmed, saying, Of a truth this fellow also was with him: for he is a Galilaean.
And Peter said, Man, I know not what thou sayest. And immediately, while he yet spake, the cock crew.
And the Lord turned, and looked upon Peter. And Peter remembered the word of the Lord, how he had said unto him, Before the cock crow, thou shalt deny me thrice.
And Peter went out, and wept bitterly.