Mark 12:38 The Widow’s Offering; but she of her want did cast in all that she had, even all her living.(Listen to, Dranatized or Read) 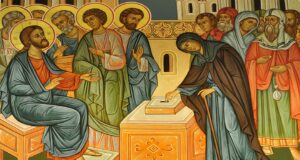 And he said unto them in his doctrine, Beware of the scribes, which love to go in long clothing, and love salutations in the marketplaces,
And the chief seats in the synagogues, and the uppermost rooms at feasts:
Which devour widows’ houses, and for a pretence make long prayers: these shall receive greater damnation.
And Jesus sat over against the treasury, and beheld how the people cast money into the treasury: and many that were rich cast in much.
And there came a certain poor widow, and she threw in two mites, which make a farthing.
And he called unto him his disciples, and saith unto them, Verily I say unto you, That this poor widow hath cast more in, than all they which have cast into the treasury:
For all they did cast in of their abundance; but she of her want did cast in all that she had, even all her living.