John 10 I Am the Good Shepherd ( Listen to, Dramatized or Read) 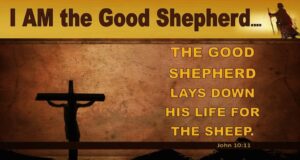 “I tell you the truth, the man who does not enter the sheep pen by the gate, but climbs in by some other way, is a thief and a robber.
The man who enters by the gate is the shepherd of his sheep.
The watchman opens the gate for him, and the sheep listen to his voice. He calls his own sheep by name and leads them out.
When he has brought out all his own, he goes on ahead of them, and his sheep follow him because they know his voice.
But they will never follow a stranger; in fact, they will run away from him because they do not recognize a stranger’s voice.”
Jesus used this figure of speech, but they did not understand what he was telling them.
Therefore Jesus said again, “I tell you the truth, I am the gate for the sheep.
All who ever came before me were thieves and robbers, but the sheep did not listen to them.
I am the gate; whoever enters through me will be saved. He will come in and go out, and find pasture.
The thief comes only to steal and kill and destroy; I have come that they may have life, and have it to the full.
“I am the good shepherd. The good shepherd lays down his life for the sheep.
The hired hand is not the shepherd who owns the sheep. So when he sees the wolf coming, he abandons the sheep and runs away. Then the wolf attacks the flock and scatters it.
The man runs away because he is a hired hand and cares nothing for the sheep.
“I am the good shepherd; I know my sheep and my sheep know me— just as the Father knows me and I know the Father—and I lay down my life for the sheep.
I have other sheep that are not of this sheep pen. I must bring them also. They too will listen to my voice, and there shall be one flock and one shepherd.
The reason my Father loves me is that I lay down my life—only to take it up again.
No one takes it from me, but I lay it down of my own accord. I have authority to lay it down and authority to take it up again. This command I received from my Father.”
At these words the Jews were again divided.
Many of them said, “He is demon-possessed and raving mad. Why listen to him?”
But others said, “These are not the sayings of a man possessed by a demon. Can a demon open the eyes of the blind?”

No one expects sheep to be responsible for themselves. Owners hire shepherds for that purpose. A shepherd’s job is to accept responsibility for the safety and well-being of his flock.

Our Lord is the Good Shepherd who defends his flock from the ravenous wolves lurking in the shadows. Given any opportunity they’ll strike, but He fends them off with sling and arrow. Have you ever heard of a sheep attacking an enemy or even defending itself from attack?  Neither have I.  I don’t think they can, and their enemies are just too powerful for them. Did you know that sheep are prone to wandering? That’s why they need shepherds, and believe me, it’s a full-time job. But in spite of the shepherd’s best efforts, the sheep do wander off from time to time, get themselves in trouble and have to be rescued.

We’d think it ludicrous for the sheep to blame the shepherd, but that’s the way we, who are sheep, treat the Lord our Shepherd. We wander off, get into trouble and have to be rescued. “Why did You let me do this Lord?” we complain, blaming Him. Unlike sheep who have no freedom of choice and no ability to learn from their mistakes, we are supposed to get smarter through our experience. We’re supposed to know how powerful our enemy is and how helpless we are without Him, and depend on our Lord for protection. That includes listening to Him when he alerts us of impending danger, or warns us not to wander.

But with the patience of a shepherd, He rounds us up, dusts us off, binds up our wounds, and gently sets us down among the flock again, knowing that soon we’ll forget the folly of wandering and off we’ll go, and He’ll have to do it all over again. His mercies are new every morning, His patience never ending, His love never failing.