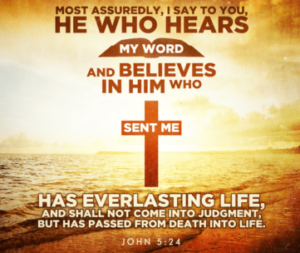 GNT … “I assure you, anyone who hears what I say and believes in the one who sent me has eternal life. They will not be judged guilty. They have already left death and have entered into life. Believe me, an important time is coming. That time is already here. People who are dead will hear the voice of the Son of God. And those who listen will live. Life comes from the Father himself. So, the Father has also allowed the Son to give life. And the Father has given him the power to judge all people because he is the Son of Man.

“Don’t be surprised at this. A time is coming when all people who are dead and in their graves will hear his voice. Then they will come out of their graves. Those who do good in this life will rise and have eternal life. But those who do evil will rise to be judged guilty.

Hearing, Believing and Doing, these are the 3 steps to Life with Christ. As Christians, We have all Heard, and We have all believed but not all of us are DOING. Like in any army, every soldier has a purpose, like in our own bodies, every cell has a purpose.
Without purpose, we become ineffective; TODAY, Stand Tall, Stand Firm find your purpose, find your passion and live for Christ and “DO GOOD” whatever it may be in Jesus’ Name.