Luke 11:18 Jesus and Beelzebul I drive out demons by the finger of God ( Listen to Darmatized or Read) 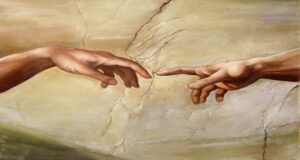 Jesus was driving out a demon that was mute. When the demon left, the man who had been mute spoke, and the crowd was amazed.
But some of them said, “By Beelzebub, the prince of demons, he is driving out demons.”
Others tested him by asking for a sign from heaven.
Jesus knew their thoughts and said to them: “Any kingdom divided against itself will be ruined, and a house divided against itself will fall.
If Satan is divided against himself, how can his kingdom stand? I say this because you claim that I drive out demons by Beelzebub.
Now if I drive out demons by Beelzebub, by whom do your followers drive them out? So then, they will be your judges.
But if I drive out demons by the finger of God, then the kingdom of God has come to you.
“When a strong man, fully armed, guards his own house, his possessions are safe.
But when someone stronger attacks and overpowers him, he takes away the armor in which the man trusted and divides up the spoils.
“He who is not with me is against me, and he who does not gather with me, scatters.
Return of an Unclean Spirit
“When an evil spirit comes out of a man, it goes through arid places seeking rest and does not find it. Then it says, ‘I will return to the house I left.’
When it arrives, it finds the house swept clean and put in order.
Then it goes and takes seven other spirits more wicked than itself, and they go in and live there. And the final condition of that man is worse than the first.”