Luke 16:9 The Rich Man and Lazarus (Listen to Dramatized or Read) 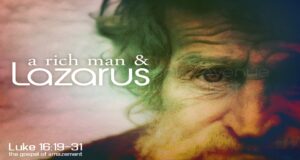 “There was a rich man who was dressed in purple and fine linen and lived in luxury every day.
At his gate was laid a beggar named Lazarus, covered with sores and longing to eat what fell from the rich man’s table. Even the dogs came and licked his sores.
“The time came when the beggar died and the angels carried him to Abraham’s side. The rich man also died and was buried.
In hell, where he was in torment, he looked up and saw Abraham far away, with Lazarus by his side.
So, he called to him, ‘Father Abraham, have pity on me and send Lazarus to dip the tip of his finger in water and cool my tongue because I am in agony in this fire.’
“But Abraham replied, ‘Son, remember that in your lifetime you received your good things, while Lazarus received bad things, but now he is comforted here and you are in agony.
And besides all this, between us and you, a great chasm has been fixed, so that those who want to go from here to you cannot, nor can anyone cross over from there to us.’
“He answered, ‘Then I beg you, father, send Lazarus to my father’s house, for I have five brothers. Let him warn them, so that they will not also come to this place of torment.’
“Abraham replied, ‘They have Moses and the Prophets; let them listen to them.’
“‘No, father Abraham,’ he said, ‘but if someone from the dead goes to them, they will repent.’
“He said to him, ‘If they do not listen to Moses and the Prophets, they will not be convinced even if someone rises from the dead.'”

GNT … This gospel reading of the rich man and Lazarus (Luke 16:9 – 31) has some very painful truths.
To those of you who believe in universal salvation think, think again.
To those of you that think that God is merciful and, as a God of love, will somehow redeem us – you now have been disabused.
No such thing can or will happen. Mercy may well apply in this world but justice and judgement will prevail in the next.

“Son, remember that you in your lifetime received your good things and Lazarus in like manner evil things; but now he is comforted here, and you are in anguish. And besides all this, between us and you, a great chasm has been fixed, in order that those who would pass from here to you may not be able in a cross from here to us.”

So, what is the sin of the rich man? The only sin suggested by the information provided is that he committed the sin of indifference to his fellow man represented in the person of Lazarus. His only concern was to spend his money on his own particular immediate material needs – and that was enough to condemn him to a place of torment. Now, for the plain truth: money is a brutal and unforgiving master. It leads us to be indifferent to neighbor and Indifference is the underlying basis of virtually all sin.

So, here it is: salvation is impossible if we are focused upon ourselves solely. We cannot walk around with our eyes closed. We know and if we know, then we must do and, if we do not do, then we are self-condemned. As Christ puts it, when confronting the Pharisees: “if I had not come and spoken to them, they would not have sinned; but now they have no excuse for their sin…” (John 15:22). Take heed, once you know about Christ then procrastination and greed is not an option. You are either for Christ or you are not. If for Christ you cheerfully help neighbor, if not for Christ you only help yourself. Your choice. Your consequence.