Luke 8:26 Demons True or False -Jesus Heals a Man with a Demon (Listen to Dramatized or Read) 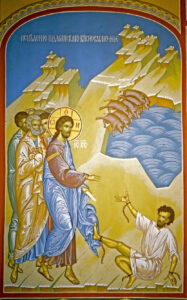 They sailed to the region of the Gerasenes, which is across the lake from Galilee.
When Jesus stepped ashore, he was met by a demon-possessed man from the town. For a long time this man had not worn clothes or lived in a house, but had lived in the tombs.
When he saw Jesus, he cried out and fell at his feet, shouting at the top of his voice, “What do you want with me, Jesus, Son of the Most High God? I beg you, don’t torture me!”
For Jesus had commanded the evil spirit to come out of the man. Many times it had seized him, and though he was chained hand and foot and kept under guard, he had broken his chains and had been driven by the demon into solitary places.
Jesus asked him, “What is your name?” “Legion,” he replied because many demons had gone into him.
And they begged him repeatedly not to order them to go into the Abyss.
A large herd of pigs was feeding there on the hillside. The demons begged Jesus to let them go into them, and he gave them permission.
When the demons came out of the man, they went into the pigs, and the herd rushed down the steep bank into the lake and was drowned.
When those tending the pigs saw what had happened, they ran off and reported this in the town and countryside, and the people went out to see what had happened. When they came to Jesus, they found the man from whom the demons had gone out, sitting at Jesus’ feet, dressed and in his right mind; and they were afraid.
Those who had seen it told the people how the demon-possessed man had been cured.
Then all the people of the region of the Gerasenes asked Jesus to leave them because they were overcome with fear. So, he got into the boat and left.
The man from whom the demons had gone out begged to go with him, but Jesus sent him away, saying,
“Return home and tell how much God has done for you.” So the man went away and told all over town how much Jesus had done for him.

GNT … This gospel reading of Jesus healing the Gadarene demoniac (Luke 8:26 – 39), in a very real sense, goes to the heart of our faith. Jesus casting out demons presents a huge dilemma to modern Western thinkers, steeped in intellectualism, cynicism and rationalism.

This “demon thing” really challenges us. After all, who can seriously accept their existence, so we depersonalize them, allegorize them, minimize them and ultimately dismiss them from our thoughts.

If Christ is the son of God, it follows that he is a truth teller. It also follows that we can rely upon his words because as God, he tells no lies.
So, if God tells us of the existence of demons then we are obliged, if we are Christians, to accept their existence.

The fact that we cannot see, touch, smell or hear demons does not make Demons any less real. I host a one-hour Christian radio program; If you tune in you can hear my voice.
However, you cannot see, touch or smell my voice.
Further, unless you have the necessary equipment that plucks my voice from the air and converts it to sound you would not be able to hear my voice. But if you cannot listen to it, it does not make my voice any less real. So, it is with demons.

So, if anyone seeks to ameliorate, reemphasize, or reframe the words of Christ or, says that demons are only symbols for or markers of bad things when Christ is dealing with demons, you should reject such words out of hand.
Simply put you cannot laugh at the notion of demons without laughing at Christ as well. And, after all isn’t this what the devil wants?

For you, cannot believe in someone, and disbelieve what they tell you.
So, by rejecting Christ’s words or works you become the devil’s advocate.