Matthew 11:28 Come to me (Listen to Dramatized or Read) 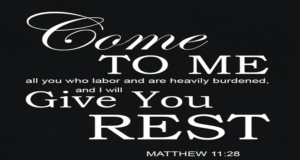 After Jesus had finished instructing his twelve disciples, he went on from there to teach and preach in the towns of Galilee.
When John heard in prison what Christ was doing, he sent his disciples to ask him, “Are you the one who was to come, or should we expect someone else?”
Jesus replied, “Go back and report to John what you hear and see:
The blind receive sight, the lame walk, those who have leprosy are cured, the deaf hear, the dead are raised, and the good news is preached to the poor.
Blessed is the man who does not fall away on account of me.”
As John’s disciples were leaving, Jesus began to speak to the crowd about John: “What did you go out into the desert to see? A reed swayed by the wind?
If not, what did you go out to see? A man dressed in fine clothes? No, those who wear fine clothes are in kings’ palaces.
Then what did you go out to see? A prophet? Yes, I tell you, and more than a prophet.
This is the one about whom it is written: “‘I will send my messenger ahead of you, who will prepare your way before you.’
I tell you the truth: Among those born of women there has not risen anyone greater than John the Baptist; yet he who is least in the kingdom of heaven is greater than he.
From the days of John the Baptist until now, the kingdom of heaven has been forcefully advancing, and forceful men lay hold of it.
For all the Prophets and the Law prophesied until John.
And if you are willing to accept it, he is the Elijah who was to come.
He who has ears, let him hear.
“To what can I compare this generation? They are like children sitting in the marketplaces and calling out to others:
“‘We played the flute for you, and you did not dance; we sang a dirge, and you did not mourn.’
For John came neither eating nor drinking, and they say, ‘He has a demon.’
The Son of Man came eating and drinking, and they say, ‘Here is a glutton and a drunkard, a friend of tax collectors and “sinners.”‘ But wisdom is proved right by her actions.”

The word “Yoke” refers to a pair or more animals bound together working. This is what Jesus invites us to do, to join with Him and work with Him, to pull together in the same direction, while all the time taking most of the load making it easier for us.