Matthew 5:3 Blessed are the poor (Listen to, Dramatized or Read) 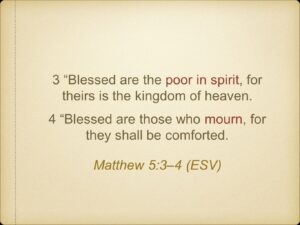 No one is self-made, we all depend on someone, from Alexander the Great & Genghis Khan to Michael Jackson & Michael Jordan we all depended on others to bring out our talents and make it to the top. No one is ever alone. God wants us to Depend on Him, Rely on Him, Trust Him, use Him; yes, God wants us to use Him, in every part of our life, at home, at work and everything in between. So, whatever you are doing today, take Jesus with you, don’t leave him at home, make space for Him in your car, on the train and at your work. Trust Him, He won’t let you down.