Matthew 15:21 Woman, you have great faith! (Listen to, Dramatized or Read) 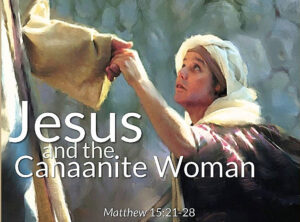 Then some Pharisees and teachers of the law came to Jesus from Jerusalem and asked,
“Why do your disciples break the tradition of the elders? They don’t wash their hands before they eat!”
Jesus replied, “And why do you break the command of God for the sake of your tradition?
For God said, ‘Honor your father and mother’ and ‘Anyone who curses his father or mother must be put to death.’
But you say that if a man says to his father or mother, ‘Whatever help you might otherwise have received from me is a gift devoted to God,’ he is not to ‘honor his father’ with it. Thus, you nullify the word of God for the sake of your tradition.
You hypocrites! Isaiah was right when he prophesied about you:
“‘These people honor me with their lips, but their hearts are far from me.
They worship me in vain; their teachings are but rules taught by men.'”
Jesus called the crowd to him and said, “Listen and understand.
What goes into a man’s mouth does not make him ‘unclean,’ but what comes out of his mouth, that is what makes him “unclean.'”
Then the disciples came to him and asked, “Do you know that the Pharisees were offended when they heard this?”
He replied, “Every plant that my heavenly Father has not planted will be pulled up by the roots.
Leave them; they are blind guides. If a blind man leads a blind man, both will fall into a pit.”
Peter said, “Explain the parable to us.”
“Are you still so dull?” Jesus asked them.
“Don’t you see that whatever enters the mouth goes into the stomach and then out of the body?
But the things that come out of the mouth come from the heart, and these make a man ‘unclean.’
For out of the heart come evil thoughts, murder, adultery, sexual immorality, theft, false testimony, slander.
These are what make a man ‘unclean’; but eating with unwashed hands does not make him “unclean.'”
Leaving that place, Jesus withdrew to the region of Tyre and Sidon.
A Canaanite woman from that vicinity came to him, crying out, “Lord, Son of David, have mercy on me! My daughter is suffering terribly from demon-possession.”
Jesus did not answer a word. So, his disciples came to him and urged him, “Send her away, for she keeps crying out after us.”
He answered, “I was sent only to the lost sheep of Israel.”
The woman came and knelt before him. “Lord, help me!” she said.
He replied, “It is not right to take the children’s bread and toss it to their dogs.”
“Yes, Lord,” she said, “but even the dogs eat the crumbs that fall from their masters’ table.”
Then Jesus answered, “Woman, you have great faith! Your request is granted.” And her daughter was healed from that very hour.
Jesus left there and went along the Sea of Galilee. Then he went up on a mountainside and sat down.
Great crowds came to him, bringing the lame, the blind, the crippled, the mute and many others, and laid them at his feet; and he healed them.
The people were amazed when they saw the mute speaking, the crippled made well, the lame walking and the blind seeing. And they praised the God of Israel.
Jesus called his disciples to him and said, “I have compassion for these people; they have already been with me three days and have nothing to eat. I do not want to send them away hungry, or they may collapse on the way.”
His disciples answered, “Where could we get enough bread in this remote place to feed such a crowd?”
“How many loaves do you have?” Jesus asked. “Seven,” they replied, “and a few small fish.”
He told the crowd to sit down on the ground.
Then he took the seven loaves and the fish, and when he had given thanks, he broke them and gave them to the disciples, and they in turn to the people.
They all ate and were satisfied. Afterward, the disciples picked up seven basketfuls of broken pieces that were left over.
The number of those who ate was four thousand, besides women and children.
After Jesus had sent the crowd away, he got into the boat and went to the vicinity of Magadan.

GNT … The Canaanite woman, was crying after Jesus and His disciples. She had a demon-possessed daughter, and she was begging Him to heal her. When His Apostles also asked Him to grant her request, He seemed to insult her by saying: “It is not fair to take the children’s bread and throw it to the little dogs”.

The Lord did not say such a thing to be rude to her or because He was discriminating, but to reveal her humility and her faith. She replied: “Yes, Lord, yet even the little dogs eat the crumbs that fall from their master’s table.” Then Jesus marvelled at the greatness of her faith and immediately healed her daughter. Her faith was not only “great”, as Jesus declared, but it was also correct. Because we might have great faith in something groundless and just waste our time. Faith in something with Essence, with Power, faith in God, has itself the ability to absorb power from the subject we believe in and perform miracles both to ourselves and to the ones we pray for. The Canaanite woman’s faith healed her daughter. Not herself.

The Canaanite woman with her numbered words basically said, that for the Lord to cast out the demon who was making her daughter suffer greatly, was as simple as a crumb that falls from His table. He didn’t even need to pay any attention to it. And it is indeed so small considering what God is able to do. What did the Israelites believe in? In an earthly king. This is the reason why they did not pay any attention to Christ. They never thought He was worth anything. They still expect the Messiah. This is how wrong and how small their faith was. Comparing it with the Canaanite woman’s faith, it was not even a crumb. Therefore, they could not even receive a crumb from the Gifts of the Gift giver Lord. And, He was not even their Lord. They never wanted Him to be their Lord.

Casting out demons is natural and effortless for Christ, like the disappearance of the darkness once the light turns on. The light does not struggle or fight to make the darkness disappear. The result is automatic. The presence of light casts out the darkness. Likewise, to free ourselves from our demons and our passions we need the Canaanite woman’s faith to start with, but it will be an automatic effect of becoming One with God. The freedom from the demons and our passions though is like crumbs compared to the unique event of our ontological Union with Christ. We have been called to become Sons of God, One with Christ, His true-born children and participants of His Mystical Super. But are we ourselves asking for crumbs? Are we asking Him to fill us up with food fit for dogs? In other words, do we have materialistic and earthly requests from our Lord? Are we insulting Him by asking for these unimportant things? Because, what sort of father would allow his children to ask him for the food he would throw to his dogs?

Our financial and health wishes are less than crumbs for Christ. He was God, He became human, and He died on the cross, for us to become Godlike; to become One with Him. Our presence alone to be able to perform miracles. The presence of Christ inside us. To be able to spiritually feed multitudes of people from His riches and His Grace. When we have correct and strong faith, God does not only feed us. He makes us rulers of Egypt, like Joseph, so that we would be able to feed millions of hungry people. Our prayers can have such power. But do we possess such faith, or are we possessed from our passions and our anxieties? The variation on the level of our faith can make all the difference: die from hunger or become facilitators for uncountable souls.