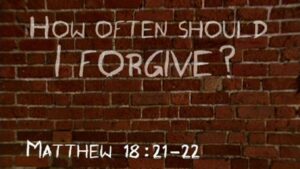 At that time the disciples came to Jesus and asked, “Who is the greatest in the kingdom of heaven?”
He called a little child and had him stand among them.
And he said: “I tell you the truth, unless you change and become like little children, you will never enter the kingdom of heaven.
Therefore, whoever humbles himself like this child is the greatest in the kingdom of heaven.
“And whoever welcomes a little child like this in my name welcomes me.
But if anyone causes one of these little ones who believe in me to sin, it would be better for him to have a large millstone hung around his neck and to be drowned in the depths of the sea.
“Woe to the world because of the things that cause people to sin! Such things must come, but woe to the man through whom they come!
If your hand or your foot causes you to sin, cut it off and throw it away. It is better for you to enter life maimed or crippled than to have two hands or two feet and be thrown into eternal fire.
And if your eye causes you to sin, gouge it out and throw it away. It is better for you to enter life with one eye than to have two eyes and be thrown into the fire of hell.
“See that you do not look down on one of these little ones. For I tell you that their angels in heaven always see the face of my Father in heaven.
“What do you think? If a man owns a hundred sheep, and one of them wanders away, will he not leave the ninety-nine on the hills and go to look for the one that wandered off?
And if he finds it, I tell you the truth, he is happier about that one sheep than about the ninety-nine that did not wander off.
In the same way your Father in heaven is not willing that any of these little ones should be lost.
“If your brother sins against you, go and show him his fault, just between the two of you. If he listens to you, you have won your brother over.
But if he will not listen, take one or two others along, so that ‘every matter may be established by the testimony of two or three witnesses.’
If he refuses to listen to them, tell it to the church; and if he refuses to listen even to the church, treat him as you would a pagan or a tax collector.
“I tell you the truth, whatever you bind on earth will be bound in heaven, and whatever you loose on earth will be loosed in heaven.
“Again, I tell you that if two of you on earth agree about anything you ask for, it will be done for you by my Father in heaven.
For where two or three come together in my name, there am I with them.”
Then Peter came to Jesus and asked, “Lord, how many times shall I forgive my brother when he sins against me? Up to seven times?”
Mat 18:22 Jesus answered, “I tell you, not seven times, but seventy-seven times.
“Therefore, the kingdom of heaven is like a king who wanted to settle accounts with his servants.
As he began the settlement, a man who owed him ten thousand talents was brought to him.
Since he was not able to pay, the master ordered that he and his wife and his children and all that he had be sold to repay the debt.
Mat 18:26 “The servant fell on his knees before him. ‘Be patient with me,’ he begged, ‘and I will pay back everything.’
The servant’s master took pity on him, canceled the debt and let him go.
“But when that servant went out, he found one of his fellow servants who owed him a hundred denarii. He grabbed him and began to choke him. ‘Pay back what you owe me!’ he demanded.
“His fellow servant fell to his knees and begged him, ‘Be patient with me, and I will pay you back.’
“But he refused. Instead, he went off and had the man thrown into prison until he could pay the debt.
When the other servants saw what had happened, they were greatly distressed and went and told their master everything that had happened.
“Then the master called the servant in. ‘You wicked servant,’ he said, ‘I canceled all that debt of yours because you begged me to.
Shouldn’t you have had mercy on your fellow servant just as I had on you?’
In anger his master turned him over to the jailers to be tortured, until he should pay back all he owed.
“This is how my heavenly Father will treat each of you unless you forgive your brother from your heart.”

GNT – The gospel reading of Matthew 18: 23 – 35, of the parable of the unforgiving servant is part of the teaching of how we should act towards one another. It deals principally with the question of forgiveness and to give an insight into the question posed to the Lord by Peter of “how often shall my brother sin against me, and I forgive him? Up to 7 times? To which Christ responded: “I do not say to you after seven times but up to 70 times seven.” (v 21 – 22)

The dynamics of the reading is as follows: a servant is forgiven an impossible debt that he had no human capacity to repay. That same servant sees a fellow servant, his debtor of a small sum, and insists that he be dealt with according to the law when he cannot repay when he makes demand upon him. Upon finding this out the King, who had released the offending debtor from his colossal debt, seized him and demanded payment of what is owed – just as that wretch had demanded from the one who owed him. Consequently, both are now in prison until the payment of their respective debts.

Notice this, that in those days if you could not pay your debt you were thrown and stayed in prison until your debt had been repaid. Whether for 10,000 talents or 100 denarii, due and owing, the punishment was the same. Now you may think that the debt for 10,000 talents, once forgiven had been extinguished. Yet this King to whom we are all servants, in whom we move, breathe and have our being reimposed that penalty upon that wretched servant. But, consider this: did he really reimposed that obligation or did something else happen?

Here’s the thing: our King will forgive all debts due and owing to him provided we show compassion and love to our fellow man. By the same measure we mete we also will have meted out. We cannot ask for forgiveness and refuse to forgive. Do not forget the forgiveness of the sinful woman. As Christ said “her sins, which are many, are forgiven for she loves much. But to whom little is forgiven, the same loves little.” (Luke 7:47). If we love much then we will forgive much. If we fail to show forgiveness then we love little and hence are self-condemned. Then any forgiveness that we may have received will evaporate and then once again we will be under the same condemnation that we had been forgiven of.

So, the reality is that this King who rules over us is not capricious. Rather, it is our actions that move us into the kingdom or slam the doors of the kingdom shut in our face. And the beauty is this: we are never affixed to one or the other. We can through our conduct is easily lose it or gain it, and we may go from condemnation to salvation and vice versa in a flash. You see, love of Christ is manifested through love of neighbor and if we deny neighbor, then we deny Christ and if we deny Christ we deny ourselves. And the thing is we never know when we will be facing our King to render account – and that fearful day may see us on the divide of condemnation. Then if we are condemned to the torturers we have no one to blame but ourselves. That is the just threat of punishment hanging over us all..