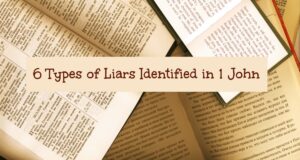 2. People who claim they haven’t sinned because they’ve redefined sin according to culture’s standards, calling God a liar -: 1 John 1:10 If we claim we have not sinned, we make him out to be a liar and his word has no place in our lives.

4. People who claim to walk in light while hating their brothers -: 1 John 2:9 Anyone who claims to be in the light but hates his brother is still in the darkness.

5. People who say they love God but really love the world -: 1 John 2:15 Do not love the world or anything in the world. If anyone loves the world, the love of the Father is not in him.

May we stand firm against these lies.