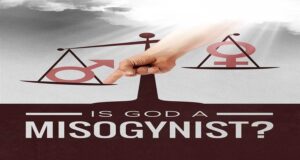 GNT … God is the first to stand up for Women and their rights.
Jesus not only set man free but also set women free.

The God of the Bible is no respecter of persons, HE values women every bit as much as He does men;
If people would just carefully search Scripture and not just quote the first paragraph they that fits their narrative. they would find that regardless of culture, social or economic conditions, God is constantly revealing His love and concern for women.

The God of the Bible was a tradition breaker, an equal opportunist, and in no place did He break with tradition more completely than HE did in HIS relationship with women.
The Bible was written in an age and culture that often considered women as property, sometimes on a par equal with children or even dogs. Women’s testimony was not accepted in a court of law.
Yet time and time again, Jesus violated those conventions by His friendship with a woman.
The Early Church followed Jesus’ lead, and history shows us that wherever Christianity went, the status of women was immediately raised.

The Bible was written in a time when women were more possessions than treasures. Yet, in Scripture we find Jesus ​constantly ​breaking the societal norms treating women with honor, respect and love.

The women of the Bible are the first examples of how God sees all of us and how much Love HE has women.

In the creation story, God equally created man and woman in his image (Genesis 1:27). Man did not receive more of God’s image than the woman. Scripture outlines the roles of Christian women and men, but God created women to share fully in representing who He is.

Paul says we are all children of God by faith. “There is neither Jew nor Gentile, neither slave nor free, nor is there male and female, for you, are all one in Christ Jesus.” (Galatians 3:28).

Women are part of the redemption story.  The Bible describes several roles for women. Wife, mother, helper, teacher, and homemaker are a few. But the overarching objective for women is to further the kingdom of God.

God designed a specific story for every woman. That story might be one of a prodigal past or as a life-long follower of the Living God. Whatever the path, by telling the story of how God’s love changed our lives, we share the good news and fulfill our purpose. There is a woman somewhere waiting to hear your story and learn how God loves them too.

Throughout the Bible, women like Esther and ordinary people like Ruth play a vital part in God’s redemptive plan. For instance, in the story of Rahab, a prostitute, she hides two Jewish spies. Her loyalty in action is rewarded, and she becomes the mother of Boaz who marries Ruth, a Moabite widow who becomes the mother of Obed the father of David (Matthew 1:1-17).  Sarah’s slave, Hagar, experienced His caring watch. Expecting Abraham’s child, Hagar ran away from her master to the desert and was doomed to die. But God saw her despair and spoke. “She gave this name to the Lord who spoke to her: ‘You are the God who sees me,’ for she said, ‘I have now seen the One who sees me’” (Genesis 16:13).
Throughout scripture, there is evidence that God answers the prayers of women. Consider Hannah, who was disgraced and humiliated because she was barren. When no one else understood her despair, she turned to God. Hannah knew her Elohim, her all-powerful God, was able to do whatever she asked.
In her deep anguish, Hannah prayed to the Lord, weeping bitterly (1 Samuel 10:10). God answered and she became pregnant and gave birth to a son she named Samuel, saying, “Because I asked the Lord for him” (1 Samuel 10:20).

The Old Testament abounds with accounts of brave, capable women who leaned on God’s strength and provision to do His will. For instance, Deborah was named one of the first judges to preside over God’s people. Through God’s prophetic word, she led the people to victory over their oppressors (Judges 4-5). Also, Esther was a beautiful Jewish girl who married a king. When her people faced genocide, she had to choose between her safety or bravely intercede and risk her life (Esther 7:4).

In Jesus’ day, rabbis would not teach women, and men would not let women count change into their hands for fear of touching. Women were invisible, but God sees us.

Jesus looks beyond our past and into our hearts, HE sees us for who we can be. The Samaritan woman went to draw water during the hottest part of the day to avoid the people who labeled her as an outcast. When she encountered Jesus, he saw beyond the labels and saw the woman she could be, a woman used by God.

In the New Testament, women participated in Jesus’ ministry. Women, healed by Jesus in some way, traveled with him and cared for his needs. In all four gospels the teachings of Jesus include women, and he used women to spread the gospel. Women are an indispensable part of God’s plan of redemption.
Imagine the woman caught in adultery as she was dragged through Jerusalem and deposited before Jesus. The law demanded she be stoned, but the leaders used her situation to trap Jesus. Instead, Jesus used the moment to point out the sin in every heart. “Let him who is without sin among you be the first to throw a stone at her.
No stones were thrown because we all sin, and there was no condemnation from Jesus, only forgiveness. God promises, “If we confess our sins, he is faithful and just and will forgive us our sins and purify us from all unrighteousness” (1 John 1:9). Our sins are separated from us as far as the east is from the west (Psalm 103:12).
Women are so important to Jesus that it was two women who first witnessed evidence of His resurrection.

In ancient culture, only sons were considered heirs to their father’s estate. Paul says in Galatians 3:26, “for in Christ Jesus, you are all sons of God, through faith.” The phrase “all sons” means women and men have an equal status in God’s inheritance. We are all “sons” and heirs.
Paul goes on to say that through faith in Christ, all classifications fall away. “There is neither Jew nor Greek, there is neither slave nor free, there is no male and female, for you, are all one in Christ Jesus” (Galatians 3:28). Through faith in Christ, we are all heirs in the kingdom of God.

Since the early church, women played important roles in its unity and function. Paul praises the work of fellow missionaries Priscilla and her husband, Aquilla, and when Scripture mentions the couple, it is as fellow workers. Priscilla was said to be an excellent teacher and one of the early churches in Ephesus began in their home where they often extended hospitality to travelers.

Women named and unnamed played meaningful parts in building the early church. In Romans, Paul introduces a woman named Phoebe, about which little is known except that she was devoted to the church, and Paul trusted her to deliver his letter to the Christians in Rome.

Paul writes, “just as the body is one and has many members, and all the members of the body, though many, are one body, so it is with Christ” (1 Corinthians 12:12). Every person is essential to the body of Christ, both women and men working together in unity.

Jesus loves us in the same way, so profoundly that He endured the worst suffering to ensure our future. “For God so loved the world, that he gave his only son, that whoever believes in him should not perish but have eternal life”

Scripture, the inerrant Word of God, shows us that women are loved by God. The Bible teaches that women are treasures and God’s beloved. “You will be a crown of splendor in the LORD’s hand, a royal diadem in the hand of your God” (Isaiah 62:3).

The New Testament refers to over 70 women by name or title as being followers of Jesus or workers for the Gospel; So, don’t tell me our Lord God Jesus Christ of Nazareth has a Chauvinistic, Misogynistic, or Sexist personality, just so you can push a narrative to suite your cause. Because the Bible shows the true personality of God, and it’s there for all to seek and find.