Hebrews 10:35 – Do not lose your courage then, because it brings with it a great reward. (Listen to or Read) 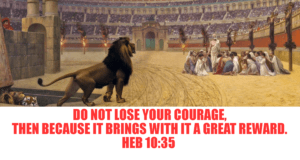 Consider our present circumstances, there’s an increasing number of individuals, particularly within the pews, who struggle to see anything other than cowardice and complicity in the face of fairly mild risk. Especially when we reflect on, not only the risks the church has faced throughout history, but the risk Christians presently face for gathering in worship throughout the world.

It certainly flies in the face of stories from the early Church, where Christians, faced with certain death, risked life and limb not to forsake the gathering.

Polycarp, bishop of Smyrna, in A.D. 156 said “Eighty and six years I have served Him, and He has done me no wrong,” before climbing onto a pyre where Roman authorities would burn him to death. Eyewitnesses reported the local authorities respected Polycarp and begged him to recant his faith in Christ, but he would not. The Romans did not even tie Polycarp to a post because they knew he would not flee the fire. Polycarp fed his captors, prayed over them and then climbed the pyre to die.

In A.D. 99, Clement, a friend to the Romans, was drowned in the sea tied to an anchor for the same reason as his friend Polycarp.

While Ignatius, bishop of Antioch, was fed to wild beasts in the Circus Maximus on July 6, 108. Again, Ignatius refused to renounce Christ.

Historians of the time, their personal writings and the writings of others tell us Polycarp, Clement and Ignatius were students of the Apostle John.

But then again, these sorts have always been in the minority.

The church isn’t a stranger to operating in the face of risk. Preaching the Lordship of Jesus under a government convinced that the only Lord is Logic & Science is the highest order; and to do so is a risk to “public health and safety”.

They were despised and regarded haters of mankind. Perhaps even some of their own followers couldn’t understand why they wouldn’t bend the Gospel here and there in an effort to spare Rome’s wrath. After all, wouldn’t that be a practical means of “loving your neighbour”?

Early Christians largely understood that while we have been commanded to “love our neighbour as ourselves,” this is not the first and greatest commandment from our Lord.

There’s always been a risk involved with “taking up your cross” and following Jesus’ commands. It poses a risk, not only to yourself, but to your loved ones and your neighbours too.

We might seek to avert risk wherever possible, especially when it comes to loving our neighbours, but you should never be required to violate the first commandment to uphold the second.

Jesus wasn’t ignorant of what that entailed and the serious risks it posed his followers. He was well aware of the dangers of following him. In fact, he told his disciples that Christianity was essentially a death sentence in the Gospel of John he said, ​ ​You will be expelled from the synagogues, and the time will come when those who kill you will think that by doing this they are serving God.​ People will do these things to you because they have not known either the Father or me.

In recent times, our governments and most churches have appealed to us for risk management and obedience, in the face of potential risk, where the “love thy neighbour” and, “obey the Laws of the Land” rational is used; now they may be right, but this is not what history has taught us.

In 1527 A.D. during the Black Plague, Martin Luther wrote a letter, detailing the Christian’s duty amid the pandemic.

As of first importance, Luther said the people must be admonished to attend church and listen to the sermon. This was to occur weekly and would include confession and participation in the Lord’s Supper.

The reason for this, was so that the people would “learn through God’s word how to live and to die,” as well as “prepare in time and get ready for death”.

Similarly, during the fourth Cholera pandemic of the 19th century, Charles Spurgeon,  said let us use the outbreak for a specific purpose, namely, to awaken an indifferent population, to make them remember that there is a God, and to render them susceptible to the influences of the Gospel, and thus drive them to the house of prayer, to influence their minds to receive the Word.

What a sham it would be if those driven to the church found the doors closed in their faces, and those with the remedy to fear and death, locked within their homes under the guise of loving those same people.