Pascal’s wager – Place your bet (Listen to or Read) 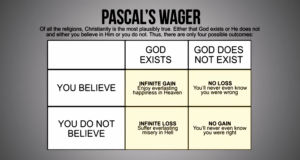 Pascal’s wager is an argument in philosophy presented by the seventeenth-century French philosopher, theologian, mathematician and physicist, Blaise Pascal (1623–1662). It posits that humans bet with their lives that God either exists or does not.

Pascal argues that a rational person should live as though God exists and seek to believe in God. If God does not actually exist, such a person will have only a finite loss (some pleasures, luxury, etc.), whereas if God does exist, he stands to receive infinite gains (as represented by eternity in Heaven) and avoid infinite losses (eternity in Hell).

Pascal begins by painting a situation where both the existence and non-existence of God are impossible to prove by human reason. So, supposing that reason cannot determine the truth between the two options, one must “wager” by weighing the possible consequences. Pascal’s assumption is that, when it comes to making the decision, no one can refuse to participate; withholding assent is impossible because we are already “embarked”, effectively living out the choice.

We only have two things to stake, our “reason” and our “happiness”. Pascal considers that if there is “equal risk of loss and gain” (i.e. a coin toss), then human reason is powerless to address the question of whether God exists. That being the case, then human reason can only decide the question according to possible resulting happiness of the decision, weighing the gain and loss in believing that God exists and likewise in believing that God does not exist.

He points out that if a wager were between the equal chance of gaining two lifetimes of happiness and gaining nothing, then a person would be a fool to bet on the latter. The same would go if it were three lifetimes of happiness versus nothing. He then argues that it is simply unconscionable by comparison to betting against an eternal life of happiness for the possibility of gaining nothing. The wise decision is to wager that God exists, since “If you gain, you gain all; if you lose, you lose nothing”, meaning one can gain eternal life if God exists, but if not, one will be no worse off in death than if one had not believed. On the other hand, if you bet against God, win or lose, you either gain nothing or lose everything. You are either unavoidably annihilated (in which case, nothing matters one way or the other) or miss the opportunity of eternal happiness.