The Goal of God ( Listen to or Read) 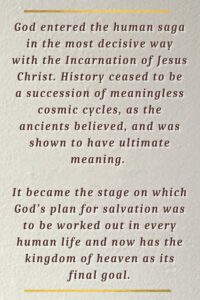 God entered the human saga in the most decisive way with the incarnation of Jesus Christ.
History ceased to be a succession of meaningless
cosmic cycles, as the ancients believed, and was shown to have ultimate meaning.

It became the stage on which God’s plan for salvation was to be worked out in every human life and now
has the kingdom of heaven as its final goal.