The Kingdom of Heaven is like ….. (Listen to, Dramatized or Read) 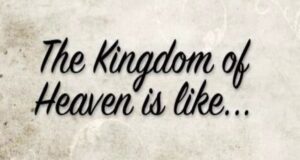 The Parable of the Weeds: Matthew 13:24
Jesus told them another parable: “The kingdom of heaven is like a man who sowed good seed in his field.
But while everyone was sleeping, his enemy came and sowed weeds among the wheat, and went away.
When the wheat sprouted and formed heads, then the weeds also appeared.
“The owner’s servants came to him and said, ‘Sir, didn’t you sow good seed in your field? Where then did the weeds come from?’
“‘An enemy did this,’ he replied. “The servants asked him, ‘Do you want us to go and pull them up?’
“‘No,’ he answered, ‘because while you are pulling the weeds, you may root up the wheat with them.
Let both grow together until the harvest. At that time I will tell the harvesters: First collect the weeds and tie them in bundles to be burned; then gather the wheat and bring it into my barn.'”

The Mustard Seed and the Leaven: Matthew 13:31
He told them another parable: “The kingdom of heaven is like a mustard seed, which a man took and planted in his field.
Though it is the smallest of all your seeds, yet when it grows, it is the largest of garden plants and becomes a tree, so that the birds of the air come and perch in its branches.”
He told them still another parable: “The kingdom of heaven is like yeast that a woman took and mixed into a large amount of flour until it worked all through the dough.”

The Parable of the Hidden Treasure: Matthew 13:44
He who has ears, let him hear. “The kingdom of heaven is like treasure hidden in a field. When a man found it, he hid it again, and then in his joy went and sold all he had and bought that field.

The Parable of the Pearl of Great Value: Matthew 13:45
“Again, the kingdom of heaven is like a merchant looking for fine pearls.
When he found one of great value, he went away and sold everything he had and bought it.

The Parable of the Net: Matthew 13:47
“Once again, the kingdom of heaven is like a net that was let down into the lake and caught all kinds of fish.
When it was full, the fishermen pulled it up on the shore. Then they sat down and collected the good fish in baskets, but threw the bad away.
This is how it will be at the end of the age. The angels will come and separate the wicked from the righteous and throw them into the fiery furnace, where there will be weeping and gnashing of teeth.

New and Old Treasures: Matthew 13:51
“Have you understood all these things?” Jesus asked. “Yes,” they replied.
He said to them, “Therefore every teacher of the law who has been instructed about the kingdom of heaven is like the owner of a house who brings out of his storeroom new treasures as well as old.”

The Parable of the Unforgiving Servant: Matthew 18:21
Then Peter came to Jesus and asked, “Lord, how many times shall I forgive my brother when he sins against me? Up to seven times?”
Jesus answered, “I tell you, not seven times, but seventy-seven times.
“Therefore, the kingdom of heaven is like a king who wanted to settle accounts with his servants.
As he began the settlement, a man who owed him ten thousand talents was brought to him.
Since he was not able to pay, the master ordered that he and his wife and his children and all that he had be sold to repay the debt.
“The servant fell on his knees before him. ‘Be patient with me,’ he begged, ‘and I will pay back everything.’
The servant’s master took pity on him, canceled the debt and let him go.
“But when that servant went out, he found one of his fellow servants who owed him a hundred denarii. He grabbed him and began to choke him. ‘Pay back what you owe me!’ he demanded.
“His fellow servant fell to his knees and begged him, ‘Be patient with me, and I will pay you back.’
“But he refused. Instead, he went off and had the man thrown into prison until he could pay the debt.
When the other servants saw what had happened, they were greatly distressed and went and told their master everything that had happened.
“Then the master called the servant in. ‘You wicked servant,’ he said, ‘I canceled all that debt of yours because you begged me to.
Shouldn’t you have had mercy on your fellow servant just as I had on you?’
In anger his master turned him over to the jailers to be tortured, until he should pay back all he owed.
“This is how my heavenly Father will treat each of you unless you forgive your brother from your heart.”

Laborers in the Vineyard: Matthew 20:1
“For the kingdom of heaven is like a landowner who went out early in the morning to hire men to work in his vineyard.
He agreed to pay them a denarius for the day and sent them into his vineyard.
“About the third hour he went out and saw others standing in the marketplace doing nothing.
He told them, ‘You also go and work in my vineyard, and I will pay you whatever is right.’
So they went. “He went out again about the sixth hour and the ninth hour and did the same thing.
About the eleventh hour he went out and found still others standing around. He asked them, ‘Why have you been standing here all day long doing nothing?’
“‘Because no one has hired us,’ they answered. “He said to them, ‘You also go and work in my vineyard.’
“When evening came, the owner of the vineyard said to his foreman, ‘Call the workers and pay them their wages, beginning with the last ones hired and going on to the first.’
“The workers who were hired about the eleventh hour came and each received a denarius.
So when those came who were hired first, they expected to receive more. But each one of them also received a denarius.
When they received it, they began to grumble against the landowner.
“These men who were hired last worked only one hour,’ they said, ‘and you have made them equal to us who have borne the burden of the work and the heat of the day.’
“But he answered one of them, ‘Friend, I am not being unfair to you. Didn’t you agree to work for a denarius?
Take your pay and go. I want to give the man who was hired last the same as I gave you.
Don’t I have the right to do what I want with my own money? Or are you envious because I am generous?’
“So the last will be first, and the first will be last.”

The Parable of the Wedding Feast: Matthew 22:1
Jesus spoke to them again in parables, saying:
“The kingdom of heaven is like a king who prepared a wedding banquet for his son.
He sent his servants to those who had been invited to the banquet to tell them to come, but they refused to come.
“Then he sent some more servants and said, ‘Tell those who have been invited that I have prepared my dinner: My oxen and fattened cattle have been butchered, and everything is ready. Come to the wedding banquet.’
“But they paid no attention and went off—one to his field, another to his business.
The rest seized his servants, mistreated them and killed them.
The king was enraged. He sent his army and destroyed those murderers and burned their city.
“Then he said to his servants, ‘The wedding banquet is ready, but those I invited did not deserve to come.
Go to the street corners and invite to the banquet anyone you find.’
So the servants went out into the streets and gathered all the people they could find, both good and bad, and the wedding hall was filled with guests.
“But when the king came in to see the guests, he noticed a man there who was not wearing wedding clothes.
“Friend,’ he asked, ‘how did you get in here without wedding clothes?’ The man was speechless.
“Then the king told the attendants, ‘Tie him hand and foot, and throw him outside, into the darkness, where there will be weeping and gnashing of teeth.’
“For many are invited, but few are chosen.”