Psalm 99 The LORD reigns (Listen to, Dramatized or Read) 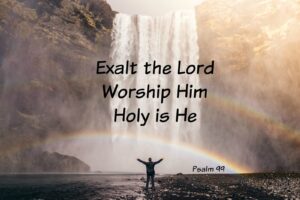 The LORD reigns, let the nations tremble; he sits enthroned between the cherubim, let the earth shake.
Great is the LORD in Zion; he is exalted over all the nations.
Let them praise your great and awesome name— he is holy.
The King is mighty, he loves justice— you have established equity; in Jacob you have done what is just and right.
Exalt the LORD our God and worship at his footstool; he is holy.
Moses and Aaron were among his priests, Samuel was among those who called on his name; they called on the LORD, and he answered them.
He spoke to them from the pillar of cloud; they kept his statutes and the decrees he gave them.
O LORD our God, you answered them; you were to Israel a forgiving God, though you punished their misdeeds.
Exalt the LORD our God and worship at his holy mountain, for the LORD our God is holy.

GNT … Some non-believers say they won’t ever give their lives to the Lord because they think He’ll make them give up everything they enjoy. Some believers think that having been saved by grace they can now do anything they please. Both are wrong.

The Lord came to free us from bondage and self-destruction  not plunge us further into it. I have come that they may have life, and have it to the full. It’s man’s way that has been lost to the bondage of sin, the Bible argues persistently against it. Mankind has been taken captive through hollow and deceptive philosophy, which depends on human tradition and the basic principles of this world rather than on Christ.

What non-believers will never understand until they’ve experienced it is that believers haven’t given up anything. On the contrary, we’ve gained an immeasurable treasure. When we change our behavior out of gratitude, we don’t feel deprived. We feel blessed to have been freed from the bondage of our self-destructive ways, elevated from ruffian to royalty, from prisoner to prince and princess. On our way to becoming Kings and Priests. AMEN