Psalm 19:1 The heavens declare the glory of God (Listen to, Dramatized or Read) 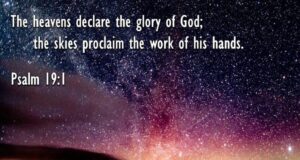 For the director of music. A psalm of David.
The heavens declare the glory of God; the skies proclaim the work of his hands.
Day after day they pour forth speech; night after night they display knowledge.
There is no speech or language where their voice is not heard.
Their voice goes out into all the earth, their words to the ends of the world. In the heavens he has pitched a tent for the sun, which is like a bridegroom coming forth from his pavilion, like a champion rejoicing to run his course.
It rises at one end of the heavens and makes its circuit to the other; nothing is hidden from its heat.
The law of the LORD is perfect, reviving the soul. The statutes of the LORD are trustworthy, making wise the simple.
The precepts of the LORD are right, giving joy to the heart. The commands of the LORD are radiant, giving light to the eyes.
The fear of the LORD is pure, enduring forever. The ordinances of the LORD are sure and altogether righteous.
They are more precious than gold, than much pure gold; they are sweeter than honey, than honey from the comb.
By them is your servant warned; in keeping them there is great reward.
Who can discern his errors? Forgive my hidden faults.
Keep your servant also from willful sins; may they not rule over me. Then will I be blameless, innocent of great transgression.
May the words of my mouth and the meditation of my heart be pleasing in your sight, O LORD, my Rock and my Redeemer.

GNT … David, the shepherd-king, was accustomed to spending time outdoors. Both day and night he scanned the sky, and what he saw—the immense array of stars, the sun, and the moon—taught him to worship the Creator. The existence and structure of what we see in the heavens and sky keep on declaring God’s glory. God’s glory is His perfections revealed. All the stars, the sun, moon, and clouds are His “handiwork.” Just as an artist’s painting is his handiwork, even so the heavens and the sky are God’s handiwork.
That’s as true today as it was thousands of years ago: science continues to deepen our appreciation for God’s design. The more we learn about how the universe is structured, and how it works, the more fully we grasp the power of God. The message of this verse is also important for establishing “universal” evidence. Nature itself declares that there is a God, and tells us much about Him—this is something all people have some ability to understand.

The natural world reveals that God is wise, powerful, and eternal.