Mary the God Bearer (Listen to or Read) 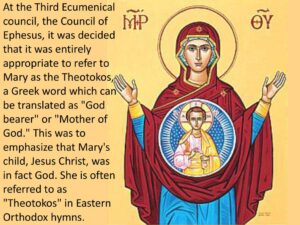 She is often referred to as Theotokos in Eastern Orthodox hymns..

The Mother of God, Mother of Jesus, wife of St. Joseph, and the greatest of all Christian saints. The Virgin Mother “was, after her Son, exalted by divine grace above all angels and men”

The New Testament begins its account of Mary’s life with the Annunciation, when the angel Gabriel appeared to her and announced her divine selection to be the mother of Jesus. Church tradition and the Gospel of James state that her parents were an elderly couple, Saint Joachim and Saint Anne. The Bible tells us of Mary’s role in key events of the life of Jesus from his conception to his Ascension. Apocryphal writings tell of her subsequent death and bodily assumption into heaven.

Christians of the Catholic Church, the Eastern Orthodox Church, Oriental Orthodox Church, Anglican Communion, and Lutheran churches profess that Mary, as mother of Jesus, is the Mother of God (Μήτηρ Θεοῦ) and the Theotokos, literally “Bearer of God”. Mary has been venerated since Early Christianity. Throughout the ages she has been a favorite subject in Christian art, music, and literature.

Luke 1:26
In the sixth month of Elizabeth’s pregnancy God sent the angel Gabriel to a town in Galilee named Nazareth. He had a message for a young woman promised in marriage to a man named Joseph, who was a descendant of King David. Her name was Mary. The angel came to her and said, “Peace be with you! The Lord is with you and has greatly blessed you!”

Mary was deeply troubled by the angel’s message, and she wondered what his words meant.

The angel said to her, “Don’t be afraid, Mary; God has been gracious to you. You will become pregnant and give birth to a son, and you will name him Jesus. He will be great and will be called the Son of the Most High God. The Lord God will make him a king, as his ancestor David was, and he will be the king of the descendants of Jacob forever; his kingdom will never end!”