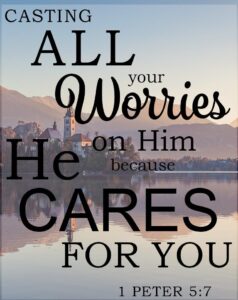 To the elders among you, I appeal as a fellow elder, a witness of Christ’s sufferings and one who also will share in the glory to be revealed:
Be shepherds of God’s flock that is under your care, serving as overseers—not because you must, but because you are willing, as God wants you to be; not greedy for money, but eager to serve; not lording it over those entrusted to you, but being examples to the flock.
And when the Chief Shepherd appears, you will receive the crown of glory that will never fade away.
Young men, in the same way be submissive to those who are older. All of you, clothe yourselves with humility toward one another because, “God opposes the proud but gives grace to the humble.”
Humble yourselves, therefore, under God’s mighty hand, that he may lift you up in due time.
Cast all your anxiety on him because he cares for you.
Be self-controlled and alert. Your enemy the devil prowls around like a roaring lion looking for someone to devour.
Resist him, standing firm in the faith because you know that your brothers throughout the world are undergoing the same kind of sufferings.
And the God of all grace, who called you to his eternal glory in Christ, after you have suffered a little while, will himself restore you and make you strong, firm and steadfast.
To him, be the power for ever and ever. Amen.
With the help of Silas, whom I regard as a faithful brother, I have written to you briefly, encouraging you and testifying that this is the true grace of God. Stand fast in it.
She who is in Babylon, chosen together with you, sends you her greetings, and so does my son Mark.
Greet one another with a kiss of love. Peace to all of you who are in Christ.

GNT … Leave all your worries with him because he cares for you.

Be alert, be on watch! Your enemy, the devil, roams around like a roaring lion, looking for someone to devour. Be firm in your faith and resist him because you know that other believers in all the world are going through the same kind of sufferings. But after you have suffered for a little while, the God of all grace, who calls you to share his eternal glory in union with Christ, will himself perfect you and give you firmness, strength, and a sure foundation.

Keywords …“a little while”… God is not interested in how old we are, or how rich we are or what condition our body is in when we come before Him, but only that we have repented; He is not concerned about whether we died of a heart attack, cancer, in a train wreck or old age, but only whether our soul is in a state of health.

Therefore, don’t be afraid of sickness and death, but dread sin alone. Poverty, disease, insults, persecution, humiliation and death are only words; they have no reality for we, who are living for the Kingdom of Heaven.

Don’t beat yourself up because you’re sick, don’t think you lack Faith or have done something wrong, just think on the lives of the Righteous Job in the Old Testament and all the saints that serve God, not because they expect any kind of reward, either spiritual or material, but simply because they love Him.

The only reality is, this Life is Short, so Stand Tall, Stand on our Faith, Fight the Good Fight, Walk the Narrow Road, Be all you can be for Jesus because we Love Him.