Ephesians 1:18 (Listen to, Dramatized or Read) 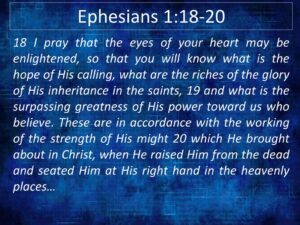 Paul, an apostle of Christ Jesus by the will of God, To the saints in Ephesus, the faithful in Christ Jesus:
Grace and peace to you from God our Father and the Lord Jesus Christ.
Spiritual Blessings in Christ
Praise be to the God and Father of our Lord Jesus Christ, who has blessed us in the heavenly realms with every spiritual blessing in Christ.
For he chose us in him before the creation of the world to be holy and blameless in his sight. In love,e predestined us to be adopted as his sons through Jesus Christ, in accordance with his pleasure and will—to the praise of his glorious grace, which he has freely given us in the One he loves.
In him we have redemption through his blood, the forgiveness of sins, in accordance with the riches of God’s grace that he lavished on us with all wisdom and understanding.
And he made known to us the mystery of his will according to his good pleasure, which he purposed in Christ, to be put into effect when the times will have reached their fulfillment—to bring all things in heaven and on earth together under one head, even Christ.
In him we were also chosen, having been predestined according to the plan of him who works out everything in conformity with the purpose of his will, in order that we, who were the first to hope in Christ, might be for the praise of his glory.
And you also were included in Christ when you heard the word of truth, the gospel of your salvation. Having believed, you were marked in him with a seal, the promised Holy Spirit, who is a deposit guaranteeing our inheritance until the redemption of those who are God’s possession—to the praise of his glory.
For this reason, ever since I heard about your faith in the Lord Jesus and your love for all the saints,
I have not stopped giving thanks for you, remembering you in my prayers.
I keep asking that the God of our Lord Jesus Christ, the glorious Father, may give you the Spirit of wisdom and revelation, so that you may know him better.
I pray also that the eyes of your heart may be enlightened in order that you may know the hope to which he has called you, the riches of his glorious inheritance in the saints, and his incomparably great power for us who believe. That power is like the working of his mighty strength, which he exerted in Christ when he raised him from the dead and seated him at his right hand in the heavenly realms, far above all rule and authority, power and dominion, and every title that can be given, not only in the present age but also in the one to come.
And God placed all things under his feet and appointed him to be head over everything for the church, which is his body, the fullness of him who fills everything in every way.

GNT … Open your minds to see his light, so that you will know what is the hope to which he has called you, how rich are the wonderful blessings he promises his people, and how very great is his power at work in us who believe. This power working in us is the same as the mighty strength which he used when he raised Christ from death and seated him at his right side in the heavenly world. Christ rules there above all heavenly rulers, authorities, powers, and lords; he has a title superior to all titles of authority in this world and in the next. God put all things under Christ’s feet and gave him to the church as supreme Lord over all things.

It’s always hard for non-believers to understand how we as Christians feel about our Lord Jesus. But do we really understand what Jesus has given us, here on Earth, NOW!. Words like RICH BLESSINGS, GREAT POWER, MIGHTY STRENGTH are words describing his power that can work in us. And if we can learn to “Believe” that is to have total Confidence, total Reliability, total Conviction in Him, then there is nothing that can stop us in doing what he has commanded of us.