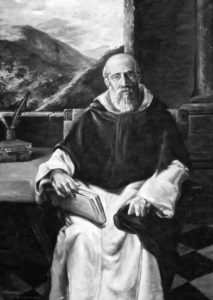 Patron of Lawyers & Canonists St. Raymond of Pennafort, Patron Saint of Canonists (Feast day – January 7) Born in Spain, St. Raymond was a relative of the King of Aragon.

From childhood, he had a tender love and devotion to our Lord Jesus Christ and the Blessed Mother. He finished his studies at an early age, and became a famous teacher. He then gave up all his honours and entered the Order of the Dominicans and was so good and kind that he won many sinners to God.

St. Raymond was very humble and very close to God.

Luke 18:9
Jesus also told this parable to some who trusted in themselves that they were righteous, and treated others with contempt: “Two men went up into the temple to pray, one a Pharisee and the other a tax collector. The Pharisee, standing by himself, prayed thus: ‘God, I thank you that I am not like other men, extortioners, unjust, adulterers, or even like this tax collector. I fast twice a week; I give tithes of all that I get.’ But the tax collector, standing far off, would not even lift up his eyes to heaven, but beat his breast, saying, ‘God, be merciful to me, a sinner!’