Ephesians 6:12 The Whole Armor of God (Listen to, Dramatized or Read) 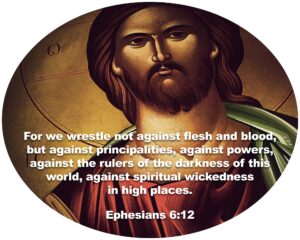 Finally, be strong in the Lord and in his mighty power.
Put on the full armor of God so that you can take your stand against the devil’s schemes.
For our struggle is not against flesh and blood, but against the rulers, against the authorities, against the powers of this dark world and against the spiritual forces of evil in the heavenly realms.
Therefore put on the full armor of God, so that when the day of evil comes, you may be able to stand your ground, and after you have done everything, to stand.
Stand firm then, with the belt of truth buckled around your waist, with the breastplate of righteousness in place, and with your feet fitted with the readiness that comes from the gospel of peace.
In addition to all this, take up the shield of faith, with which you can extinguish all the flaming arrows of the evil one.
Take the helmet of salvation and the sword of the Spirit, which is the word of God.
And pray in the Spirit on all occasions with all kinds of prayers and requests. With this in mind, be alert and always keep on praying for all the saints.
Pray also for me, that whenever I open my mouth, words may be given me so that I will fearlessly make known the mystery of the gospel, for which I am an ambassador in chains. Pray that I may declare it fearlessly, as I should.

This famous verse describes the spiritual battle that exists in the lives of believers. It does so perhaps better than any other words in Scripture. First, Paul affirms our battle is indeed spiritual, not physical. The enemies we face, ultimately, are not people or objects. The Devil may use those as part of his attack, but our true opponent is not other people: it is sin.

Second, Paul identifies our spiritual enemies. This list is commonly interpreted as a vague listing of the “ranks” within the demonic armies. “Rulers” seem to indicate a top level of evil spiritual forces. “Authorities” refer to general forces of evil attacking believers. “Cosmic powers” seems to refer to the worldwide nature of this spiritual battle. “Evil in the heavenly places” again emphasises a battle beyond this world.

Spiritual battles can occur at all levels, anywhere across this world and beyond. The believer must be prepared for all types of attacks through putting on God’s armour, as Paul describes.