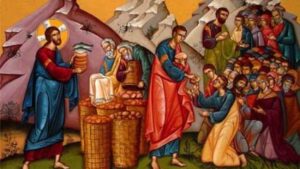 When Jesus landed and saw a large crowd, he had compassion on them and healed their sick.
As evening approached, the disciples came to him and said, “This is a remote place, and it’s already getting late. Send the crowds away, so they can go to the villages and buy themselves some food.”
Jesus replied, “They do not need to go away. You give them something to eat.”
“We have here only five loaves of bread and two fish,” they answered.
“Bring them here to me,” he said.
And he directed the people to sit down on the grass. Taking the five loaves and the two fish and looking up to heaven, he gave thanks and broke the loaves. Then he gave them to the disciples, and the disciples gave them to the people.
They all ate and were satisfied, and the disciples picked up twelve bucketfuls of broken pieces that were left over.
The number of those who ate was about five thousand men, besides women and children.

Matthew 14:14 – 22 is a wonderful affirmation of the providence and love that God has for those who follow him. In a lonely place, with 5000 men, besides women and children, Christ took five loaves and two fish and fed all of them, with 12 full baskets of remnants remaining – even after all had eaten their fill.

• Notice the human wisdom of the disciples: “this is a deserted place… Send the multitudes away so that they may go into the villages and buy themselves food.” Their focus was on alleviating responsibility for providing for the sustenance of such a large crowd. Their reasoning being, if they are dismissed, Christ (and by extension themselves) would no longer have to be concerned with them.

• Notice the heavenly wisdom of Christ: “they need not go away, you give them something to eat.” Christ does not send anyone away when they put their trust in him. No matter how humanly impossible something may be (such as feeding the multitude with such minuscule resources) heavenly wisdom will not allow those are believe to go away empty-handed.

• Christ’s love for us knows no bounds. He could have brought into being sufficient food only to feed the immediate needs of the crowd but instead, Matthew emphasises the number 12 by way of remnants. This number is an allusion to all of Israel – and not just the old Israel but the new celestial Israel that includes the heavenly Jerusalem. So, those that follow Christ – both Jew and Gentile – will now be the inheritors of the new Jerusalem”, the heavenly Kingdom. That is the promise of Christ to each and every one of us who follow him.