1 Peter 2:21 follow in his steps (Listen to, Dramatized or Read) 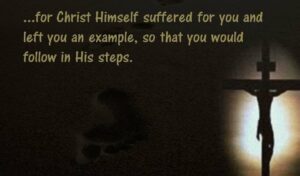 GNT … You don’t gain anything by being punished for some wrong. But God will bless you, if you have to suffer for doing good. Follow the footsteps of Christ…’

Jesus only did good, yet they hated him, do good, love God and be patient, it won’t take long for God to Bless you.