1 Peter 2:21 you should follow in his steps (Listen to, Dramatized or Read) 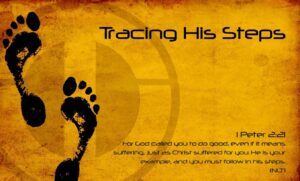 GNT … God chose you to suffer as you follow in the footsteps of Christ, who set an example by suffering for you. Christ did not sin or ever tell a lie.

Following in Jesus’ footsteps is dangerous, for this is when you attract attention and the world will persecute you, when this happens count yourself blessed.